Avoiding the surgeon’s scalpel with minimally invasive surgery, or keyhole surgery as it is often referred to, seems like a miracle of modern medicine. There is plenty of scientific evidence to prove that avoiding large incisions and reducing trauma to the patient results in quicker recovery times, shorter hospital stays and reduced infection rates. 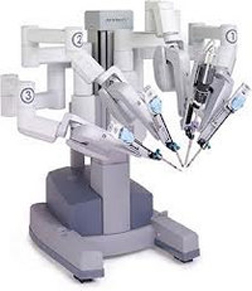 The development of microchip cameras and new, sophisticated operating room computers has made robotic surgery increasingly popular since 1987, when the first laparoscopic gallbladder surgery was done.

The latest development in minimally invasive surgery is the da Vinci robot, developed by Intuitive Surgery and licensed for use in 2005. Hundreds of thousands more will undergo a laparoscopy for everything from knee surgery to hysterectomy this year, and, as many as 500,000 Americans will opt for da Vinci robotic surgery.

“I have had some people say they don’t want da Vinci robotic surgery because of the stories they have heard on TV about complications and recall of the instruments,” says Dr. Brian Locker, obstetrician and gynecologist surgeon from the Midwest Center for Women’s Healthcare in Park Ridge, Illinois. “But I don’t believe there is any evidence to show that da Vinci robotic surgery is any more dangerous than laparoscopic surgery.”

There are some two dozen lawsuits pending as a result of complications from surgery using the da Vinci robot, and in May of 2013, Intuitive Surgical, the makers of the da Vinci robot, warned hospitals and surgeons that the surgical scissors could develop “cracks” that “may create a pathway for electrosurgical energy to leak to the tissue during use and potentially cause thermal injury.”

There is no national credential system in place for doctors using the da Vinci robot nor is there any standardized training regime. It is up to individual hospitals to see that surgeons are trained to use the $2.2 million device.

The da Vinci robot will not make people into great surgeons if they are not already skilled in the area of laparoscopic surgery says Dr. Locker. “The da Vinci robot does what we tell it to do. It doesn’t give us greater knowledge.

In addition, says Dr. Locker, the da Vinci robot has a number of built-in safety features. If the surgeon moves his eyes too far away from the viewing console, the robot freezes. “If you make a movement that is not intuitive, it will stop you from making that movement, if it seems like an odd movement,” he adds.

Hysterectomies are one of the most common surgeries in the US. Until recently, most of those surgeries were done abdominally - that is by making an incision in the abdomen and doing an “open surgery.”

More DAVINCI ROBOT News
“There are more complications from open abdominal surgery and there are more risks,” says Dr. Locker. “We used to do 20 percent of the hysterectomies using laparoscopy, and now with the da Vinci robot, we are doing 50 percent robotically nationwide. That is huge for women in this country. So I am supportive of the robot. This is nearly an outpatient surgery for women - so much easier to recover from, so much less pain, so much less suffering. And because of the robot, I am able to do almost all of my surgeries robotically - and my patients have dramatically benefited from this. That is a huge improvement over open abdominal surgeries.”

Dr. Locker is also a believer in transparency in medicine. If a patient is concerned about using new technology in the operating room, they might want to ask some questions.

“If you’re asking me if a patient should ask the surgeon how many robotic surgeries they’ve done and what their complication rate is - then the answer is yes, they should ask.”