More news News
A 19-year-old student at the University of Wisconsin-LaCrosse was ticketed recently for underage drinking and ordered to pay a $227 fine. The problem is, the evidence of his misconduct seems to consist of some photos he posted to Facebook. 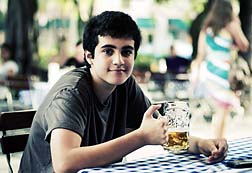 Bauer, a popular kid who has almost 400 Facebook friends, recently received a friend request from someone he allegedly didn't know, "a good-looking girl." He accepted, something he says he doesn't normally do. He thinks that was what led him shortly thereafter to accept an invitation to visit the La Crosse police station.

At the police station Bauer was shown pictures of himself and his friends drinking beer at home -- photos Bauer himself had posted on Facebook. The police report states that Bauer admitted to drinking, which the young man denies. However, he did plead no contest to the fine.

Click to learn more about LawyersandSettlements.com
LawyersandSettlements.com - A trusted, independent legal news provider bringing quality news and information on all legal cases and lawsuits filed in United States of America to its readers since 2002. Over 250,000 legal help requests including Criminal Law Cases have been forwarded to lawyers all across to the country.