oulder, CO: Intellectual property, especially copyright for writers, is seemingly a simple concept: when you create something, you own it. You decide what's done with it, and nobody else uses it without your permission. Only you can surrender your right to intellectual property. That's easily understood—or is it?

"You'd be amazed," David Oshima sighs. "I've probably seen every variation on copyright violation in the book, and maybe a few that aren't in it." Oshima (not his real name), a freelance technology journalist, says that new media such as the World Wide Web have been a particularly troublesome source of intellectual property violations.

Earlier this year, Oshima sold an article to a regional newspaper about a promising product under development at a nearby technology incubation center. "Like most newspapers, they have a Web presence," he says. "Under their generic freelancer's contract, I get an extra few bucks for any piece that they use on their site in addition to the fee for print usage. They're actually better than most that way." 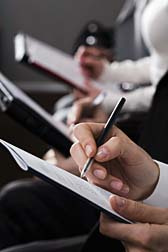 A few days after his article came out, Oshima went to the technology center's Web site to look for possible story sources. He clicked on the site's "News" button, he says "and what do I see but front and center, my article in its entirety, and at the bottom of the page, 'Reprinted by permission'. Whose permission? Not mine."

Oshima called the newspaper. "My editor was out, but I talked to one of his assistants, who told me the center had called and he had said sure, go ahead, use it, no problem. Well, there was a problem—he had no business, NONE, giving away my intellectual property. And I let him know that, along with a few other things about copyright infringement.

"I dropped an e-mail to the tech center advising them of what they'd done, and they were actually cool about it. They apologized and paid me a $50 usage fee; they have to keep their nose clean since they're partially government funded and high-profile. So this was a very rare ideal resolution."

Other times, Oshima says, he has found his material reproduced on Web sites without permission. "I've called them on it, and they have this idea that they're doing me a favor by stealing my work—they're giving me free publicity. Wrong; they're stealing my intellectual property.

"The trouble is that there are enough writers out there who are naï¿½ve enough or desperate enough or whatever to actually buy that logic. They'll give away their stuff for nothing or near nothing just to get a clip or something for their resume, and that makes it harder on people who actually write for a living to either get a decent fee or protect their intellectual property."

More COPYRIGHT News
Writers' contracts are another of Oshima's sore points, he says. "There are big media out there who want you to sign away all of your intellectual property rights before they'll publish you. They want exclusive usage and resale rights, sometimes they want a guarantee that you won't produce anything else from research done on a project for them. Essentially, they want you to sign away every one of your intellectual property rights to them forever.

"I'm involved in professional associations that are fighting this through negotiation and boycotts of specific markets, but it's an uphill battle all the way, because writers are notoriously individualistic. But it's the only way that guys like me can protect ourselves. I'm just one writer; I can't fight this kind of fight on my own—it takes collective action. It takes class action.

"And meanwhile I still have to pay my mortgage."

If your trademark, copyright or patent has been infringed on, please contact a lawyer involved in a possible [Trademark, Copyright, Patent Infringement Lawsuit] to review your case at no cost or obligation.
Request Legal Help Now