A car collided with a train at a signaled crossing on December 19, taking the lives of two elderly Vermont residents. There were working lights and bells but no gate at the site of the car crash. The accident is still under investigation. 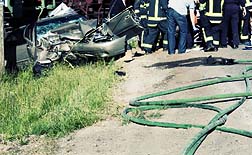 The Associated Press (AP) reported on December 20 that Everett "Barney" Mosher, 87, and his wife, Mary, 84, were traveling Saturday morning along School Street in Randolph, Vermont when they collided with a southbound Amtrak Vermonter train.

According to officials, the train was traveling within its 59 mph mandated speed limit. Bill Huntley, who lives near the tracks, told AP that the train hit the rear of the Mosher vehicle. If the car had progressed another two feet along the road, Huntley said, the train would have missed it entirely.

When Huntley heard the crash, he looked out and saw smoke and a spray of snow. He ran over to the car to try to help the victims, who appeared to be unconscious. Rescue workers had to remove the couple from the twisted wreckage.

The driver of the car was flown to Dartmouth Hitchcock Medical Center in Lebanon, New Hampshire, where he passed away later that day. His wife Mary was pronounced dead on arrival at Gifford Hospital in Randolph.

Would the addition of a safety barrier have averted the tragedy?

More CAR CRASH News
Investigators have so far determined that all warning devices at the intersection were working at the time of the crash. The Amtrak train appeared to be operating within the speed limit and the engineer activated his whistle as he approached the intersection, according to the eyewitness. Warning lights and bells appeared to be working as well, according to Randolph Patrolman Tom Simpson.

"At this point, I can find no evidence of an equipment malfunction," Simpson told AP.

It is not known why there was no physical barrier or gate installed at the intersection—a safety measure that could very well have prevented the accident.

AP reported that none of the 146 passengers or seven crew aboard the Amtrak commuter train were injured as a result of the car crash.

If you have suffered losses in this case, please send your complaint to a lawyer who will review your possible [Car Crash Lawsuit] at no cost or obligation.
Request Legal Help Now