One of the largest law firms in the world has been brought to its knees by a woman who used to work for them as a paralegal. The international law firm of O'Melveny & Myers LLP, based in Los Angeles, has 13 offices worldwide and more than 1,000 lawyers in its employ.

It has been around since 1885, and has had many notable partners through the years. 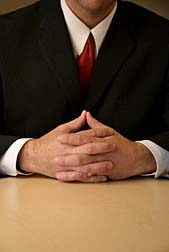 "In August, 2002, the firm adopted and distributed to its employees, a new Dispute Resolution Program which they said would be binding on all employees, including associates (i.e. lawyers who work for the firm but are not partners) -- effective November 1, 2002.

The clear aim of the DRP was to keep control of any potential litigation with employees by a process that ended with binding arbitration -- i.e. there would be no going to court.

There is no indication that the employees had much of a say in drafting the DRP. It contained provisions covering most employment-related claims, requiring an employee to give notice of any claim to the firm with a demand for mediation within one year of the claim arising, and decreed that failure to give such notice would constitute a waiver of the claim. In such case, said the DRP, the claim would be "lost forever". This was in bold print and underlined in the original.

For good measure the DRP included a strict confidentiality clause regarding the firm's mediation and arbitration proceedings.

More News
On February 27, 2004, she filed a lawsuit under the Federal Fair Labor Standards Act alleging failure to pay overtime for work during lunch time and rest periods and for other work exceeding eight hours a day and 40 hours a week, as well as denial of rest and meal periods. She also made claims under the California Labor Code and California's Unfair Business Practices, and asked for damages not just for herself but also for "all others similarly harmed."

The firm promptly went to court to have the action dismissed and to compel arbitration. The district court agreed with the firm and gave them the order they sought. Ms. Davis appealed.

Her appeal was heard by the United States Court of Appeals for the Ninth Circuit. Judge Samuel P. King gave his verdict on the appeal May 15. His decision was that the firm's arbitration agreement is unconscionable under California law. He sent the case back to the central district court in Los Angeles to be dealt with as if the arbitration agreement never existed -- under the law that applies to everybody else.

Score one for the support staff.

If you are employed in the State of California and feel that your employer or a co-worker has violated a state or federal employment law, please contact a [California Labor Laws Lawyer] who will review your case at no cost or obligation.
Request Legal Help Now