California lawmakers have expanded California labor law to increase protections for janitors, who are often vulnerable workers and at risk for sexual harassment and assault. Assembly Bill 1978 sets up registration and training requirements to help workers in the janitorial industry protect themselves against sexual harassment and assault. Employers who violate the new California labor bill could wind up losing their registration. 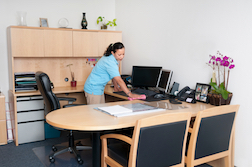 Assembly Bill 1978 was signed by California Governor Jerry Brown on September 15, according to Bloomberg BNA (9/21/16) and is geared entirely to the janitorial services industry. A 2015 PBS report titled Rape on the Night Shift shared the experiences of female janitors who are at risk for sexual harassment and assault because they tend to work in isolation, be female and may not understand their rights. The report notes that female janitors face similar risks across the US regardless of whether their employer is a small contractor or a large corporation.

A report by the University of California, Berkeley, Center for Labor Research and Education titled Race to the Bottom notes that isolation is an important factor in sexual harassment and assault.

"In a Washington state study, 85 percent of the 63 workers who were raped in the workplace were working alone (Alexander, Franklin & Wolf 1994)," the report notes. "Employers in the property services industry typically service a large number of worksites… Being isolated from co-workers and the public reduces the likelihood that anyone will intervene or serve as witnesses and allows supervisors to exert greater control over workers."

More CALIFORNIA LABOR LAW News
Following the PBS report, California State Assemblywoman Lorena Gonzalez (D-San Diego) sponsored AB 1978 to protect employees in the janitorial industry. The bill requires all employers to register annually and pay a $500 registration fee. If the employers are found to have violated California labor law, they can have their registration denied.

"We have allowed these women to become targets for sexual violence by neglecting their working conditions and basic safety on the job, but we cannot ignore this threat anymore," Gonzalez said. "AB will ensure these women—too often unseen while working alone at night—finally begin to receive the transparency and protection from rape and sexual assault they need to be kept safe."

Lawsuits have been filed against janitorial companies who failed to protect employees from sexual harassment or assault.
READ ABOUT CALIFORNIA LABOR LAW LAWSUITS

Posted by
helene loftusd
on March 5, 2017
Dapa Services Inc. is a san diego janitorial company. The owner is stealing hours from janjitors schedules , not paying overtime wages, withholding paychecks, not paying janitors all work hours, preventing workers from filing workers comp claims for serious injuries, defrauding clients by switching old and new contracts back and forth, has janitors use their own vehicles to haul trash to dump sites and doesn't pay their travel or wait time. He misclassifies workers as independent contractors, falsifys and backdates timesheets, he has workers in the office violate state and federal payroll laws that are unaware they are being targeted. He bullys office workers who don't want to carry out his unlawful acts on his behalf. Workers with expired documents dating years back are currently working on job sites
Posted by
Darcel Chambers
on October 22, 2016
I worked for Walmart/Sam's & was released for misconduct according to them. However, I was never told prior to the date of my release. I refused to sign the form.