Byetta: "I Had No Warning"

Nancy C. has never been diagnosed with pancreatitis; however, her nephrologist told her that he believes her kidney problems are related to her use of Byetta. Although she has not taken Byetta since March 2006, Nancy says her kidney function has never returned to normal—and she is upset that she was not warned about the risk to her kidneys. 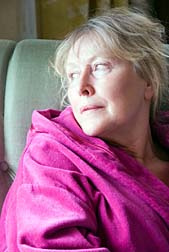 "I have been diabetic for 32 years—I'm 55 years old now," Nancy says. "When I was 40, I went on insulin. In August 2005, when Byetta came out, my endocrinologist told me about it. He said I wouldn't have to be on insulin any more, Byetta was injectable, I could get better control over my diabetes and I would lose weight. So I said I would try it.

"Before I started, the doctor told me that I would start off at five milligrams and I would have slight nausea, but that would go away. Then, shortly after, I would be put up to 10 milligrams. I started Byetta and at first everything went as the doctor said it would. I did well—my A1C [also known as glycated hemoglobin, which shows average blood glucose control] went into the normal range for a diabetic and I dropped 25 or 30 pounds, which was wonderful.

"Around December, my husband and I went on a cruise. Toward the end of the cruise, I felt kind of nauseous. I don't have motion sickness, so I knew it wasn't that. When I got home, the feeling continued but I thought it would pass. It did not pass. For the next six to eight weeks, I was nauseous after every meal except breakfast. I was throwing up and I had severe stomach pains, so my husband told me to go to a doctor.

"I went to my primary care doctor, who thought the problem was viral. He did blood tests and it turned out my creatinine levels were 2.5 times normal [normal is between 0.5 and 1.0 for a woman]. I went to my endocrinologist and he told me to stop taking Byetta. The doctor said I was dehydrated because I had been throwing up so much and thought that, when I was rehydrated, my creatinine levels would return to normal.

"I have had type II diabetes for over 30 years and have done everything I could to protect my kidneys. I had no kidney disease whatsoever before taking Byetta. Now, my kidneys operate at half what they should. I'm not on dialysis right now but one day I might be. I've also been told that my kidneys could stay this way for 20 years.

More BYETTA News
"This frustrates me. It upsets me to no end. I had no warning about my kidneys. I cannot get life insurance any more because even though my diabetes is in the normal range, my creatinine levels indicate kidney failure or kidney disease.

"I went to two different nephrologists. Both said that they've seen articles and journal studies and they believe my symptoms and creatinine problems are related to Byetta.

"I'm back on insulin now, and I have gained all the weight back. If I had more information about Byetta, I might have made a different decision because I would never put my kidneys at risk. I would not put myself at that risk. Some things are too good to be true. With Byetta it was, 'I don't have to be on insulin, I will lose weight, this drug will be great.' Six months later, it wasn't so great."

Posted by
Dianne Coats
on August 5, 2013
My story is almost identical to Nancy's. I was diagnosed with diabetes in 2005. I was put on Byetta in 2008. By 2010 Byetta had damaged my kidneys with no warning. I had the same symtoms as Nancy.