Nancy had four series of Botox injections between 2004 and 2005 but the fifth set would be her last. "This last time I had more injections that made my face feel frozen; I didn't want to tell people why, but my face was stuck in this scary expression," she says. And that's not the only side effect that Nancy endured... 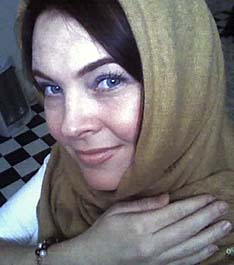 "I believe this toxin leaked into other areas of my body—if all this stuff was injected, it has to go somewhere," she says. "I firmly believe it caused my arms to get frozen and caused palpitations in my heart," Nancy (not her real name pending a possible lawsuit) says. And adding insult to injury, Nancy had to quit work at her promotional modeling job.

In 2004 and 2005, Nancy was given Botox on four occasions by a cosmetic surgeon in North Carolina. On her last visit, for an unexplained reason, he gave her more injections. "I thought he was going to give me the usual amount on my forehead and around my eyes for crow's feet—I had no idea that I was going to get that amount," she says. "I think he was in a hurry; even at that time I thought that he injected too many. I must have had five or six injections across my brow and three around each side of my eye. I trusted my cosmetic surgeon—other people, including my mother, had cosmetic surgery by him. We never once talked about any side effects.

"A few days later, I was driving to work and had difficulty breathing—it was kind of like panic attacks, my heart was racing, it felt like my heart was in my throat. I had a long drive ahead of me but never got there in time—I pulled over until the palpitations went away but they came back. One time I had to drive all the way to Florida from NC; by the time I got to Daytona I was rushed to ER and they said it was some kind of infection...

My heart rate went up so high that I thought I was going to flat-line in the ambulance. I don't take drugs or smoke and I don't drink. I was only 31 at the time and I was in really good shape, working out four times a week—I have to maintain my looks; it is part of my job.

When I got back from Daytona, it was like my body was in shock. I experienced severe tremors that were almost like seizures. This went on for about a year, on and off. They occurred every few days and I went back to ER on countless occasions. The doctors kept diagnosing me with something different each time. It never occurred to me that Botox was to blame.

I was out of work for about a year on disability--it has taken a long time to recover. I couldn't drive any longer; one time I was driving and had to pull over to a gas station and [the gas station attendants] had to call an ambulance. One time a paramedic said that I must be on cocaine. I tried to explain to them that I don't do drugs!

By this time I was probably down to $180 in my bank account. I took a Greyhound to New York where I could work and get around without a car, even though family in North Carolina took care of me. But when I got here, I was hospitalized for a month. They said it was panic attacks but again, I was trying to explain that everything may have stemmed from Botox. I had so many tests, including an MRI, an ultrasound and x-rays. No diagnosis.

I used to work out all the time and now my muscles are really weak. And my nerves still 'jump' in my arms and legs. At the time it was really bad, I couldn't even sleep—I was scared that I wouldn't wake up

I went back to my cosmetic surgeon when the symptoms were severe. I asked him if they could possibly be from Botox. He suggested that I might have Muscular Dystrophy or something else going on. 'That's funny,' I said, 'these symptoms started right after you gave me the last set of Botox.' He was in-between patients and couldn't talk to me, so I never did get a reply from him, nor did I see him again. Not having an answer and not knowing what was going on, likely exacerbated the problem.

More News
I started researching Botox online. I also talked to other people who had Botox but most of them are in denial because they don't want to admit they are having plastic surgery. Every time I mentioned Botox to a doctor, I felt shut out. One time I saw a neurologist and he just gave me a pain medication and said it was due to my sleeping patterns. But I tried to tell him that something was causing my lack of sleep - it is a vicious cycle.

I am OK today but worried that it will start over. However, I feel more in control by understanding what is going on. But I never got the full function back in my limbs—my muscles feel so weak. I am worried that my organs may be affected. I am back at the gym but only twice a week and that is an effort: this whole thing has worn me out. I am finally back at work and can drive again—now I just want to go back home and get better."

Posted by
kathy
on January 15, 2013
Wow. I hope Nancy gets better. Nobody should trust doctors no matter how prestigious or well regarded they are. There is no recourse when things go wrong, and the person who has to deal with the effects is you and the people who love you.

@Waaa - nice trolling. Might be an idea to get some empathy and perhaps a soul.

Posted by
Waaa from Maine
on March 2, 2011
You brought this on yourself! my God! What you people will do not to take responsibility - if you thought it was too much at the time... speak up, for Christ sake! You "started" researching AFTER you got the Fifth injection!?? Stupid. You deserve it! Waa - Waa - Waa