"I have one thing to say about Botox," says Richard Roe. "Don't use it." Roe was given a series of Botox injections for facial spasms but he wound up with the left side of his face paralyzed. "I couldn't even blink; I had to put eyedrops into my left eye to keep it moist and in order for me to sleep at night, I had to tape my eyelid shut."

In May, 1996 Roe received his first series of Botox injections. He had just retired from the navy and the facial spasms he was suffering from were work-related so he was seen at the VA hospital in Augusta. The doctors at the hospital gave him a thorough check-up just before the injections because his family doctor thought that he might have had a stroke. 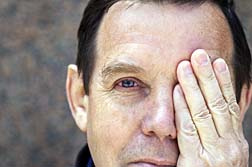 "Everything was fine and I was good to go for botox," says Roe. "I received it with no problems. I can't remember how many injections I had but they went from the top of my head to the jaw on the left side of my face. It took about 45 minutes. I felt fine but then I developed some chest pains.

"They did another complete checkup but not a catheterization---the cardiologist said it wasn't necessary. They still didn't find anything wrong. Three months later, I had a second series of Botox shots at the same hospital. The doctor who gave me botox the first time was in the room but a doctor-in-training gave me the injections this time. Shortly after starting, I became nauseous and fainted. I came to—I don't know how long I was out—but they stopped the injections. They told me to spend about 15-30 minutes laying there and I could go home.

Shortly after leaving the hospital, I developed sharp pains in my chest. I was driving by myself—it was pretty scary. I thought I was having a collapsed lung (this had already happened to me years ago while I was on active duty). I pulled over and drove myself back to the VA hospital.

I got to ER, told them my symptoms and that I had received botox injections just an hour or two ago. They told me that I was having a heart attack. I made sure my wife was contacted and that is all I remember until I came to--one week later. A whole week disappeared. During that week, the doctors told my family and my wife that I might not make it. They had to give me CPR and brought in the defibrillator.

I have proof of this in my medical report: my temperature spiked to 110 degrees; I was given four units of blood because I was bleeding through my nose and ear; I developed a hemotoma on the whole left side of my face where I received the botox injections. The left side of my face was paralyzed—I couldn't even blink. I even had to put eyedrops into my left eye to keep it moist. In order for me to sleep at night, I had to tape my eyelid shut. That lasted a few months.

I was in the hospital for about two weeks.

After they admitted me, the ER doctor questioned the neurologist about the botox. They just came down to look at me; they didn't say one thing or another. The cardiologist had to do an angioplasty on me and said I had one blocked artery. What happened to me was not common to a heart attack. I have talked to numerous doctors and nurses and they are amazed that I am still walking.

With a heart attack, something is causing chest pain, a blockage for example. Why was I bleeding, why the hemotoma? Blood was leaking out of an artery and had got under the skin. That was the botox. I have paperwork from the botox manufacturer [Allergan] that says it has caused some mild cardio infractions and even death in some cases." (See below.)

"I believe that botox caused my heart attack, because I was checked out three months prior to starting the shots and they didn't find anything wrong with me," says Roe.
"Nobody told me the dangers of Botox when I had it in the first place. And if I knew these side effects, I would never have agreed to Botox. It is very dangerous. I don't think people who are taking this drug understand the potentially disastrous side effects.

Allergan lists the side effects of Botox on its website as follows:

More Botox News
Any BOTOX® injection side effects can typically only last 6 months at a maximum, because BOTOX® treatments are temporary. People with neuromuscular disorders should consult with their physician carefully before having a BOTOX® injection treatment, as cardiovascular problems may arise. Likewise, those with cardiovascular disease should also pay special attention.

There is some BOTOX® injection side effect in that patients have experienced bruising at the site of the injection. The most common BOTOX® side effects following the use of BOTOX® Cosmetic for glabellar lines are headache (13.3%), respiratory infection (3.5%), temporary eyelid droop (3.2%), nausea (3.0%), and flu syndrome (2.0%). Blepharoptosis is consistent with the pharmacologic action of BOTOX® Cosmetic and may be technique related. In rare occurences BOTOX® cosmetic can spread into neighboring muscles and cause temporary paralysis.

If you or a loved one have suffered losses in this case, please click the link below and your complaint will be sent to a personal injury lawyer who may evaluate your Botox claim at no cost or obligation.
Request Legal Help Now

Posted by
Taylor smith
on January 14, 2018
I had juvederm and the doctor ruined my life.. it is poisen.. dont use it.. inam dying.. the procedure wasnt FDa approved,,please dont use it.. it took my life and i am ill,,