Botox may have Caused Child's Death

"My daughter was only 10 years old when she died," says Diane. "Kelsey's last set of Botox injections were given just one month before she passed away." Diane was never told of the adverse side effects from Botox that included difficulty swallowing (dysphagia), upper respiratory infection, neck pain and more…

Kelsey was very handicapped and had an undiagnosed seizure disorder that began when she was just one year old. "We had been offered trial meds--we had seen countless specialists, including the top neurologist in New York City," says Diane, "but Kelsey was not a child that could ever take part in a clinical trial: she couldn't talk; she couldn't tell us how she felt. 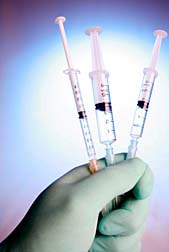 Kelsey was given Botox—300 mgs in each leg-- to stop the shaking in her legs. At the time I told our pediatrician and our neurologist that she was getting Botox. Neither of them said anything, one way or the other. She was already on a cocktail of drugs and nobody thought it was a "big deal."

Until she started choking. Within nine months, after four sets of Botox injections, Kelsey was on total neck support.

She never had choking issues before the Botox. Although she had a G-tube [a device that is inserted surgically, directly into the stomach and a feeding solution is dripped into the tube] we never had to call 911, ever. But this time her breathing was really bad. It may not have been associated with Botox but I should have been educated and informed about the possible adverse side effects of this drug. We weren't told anything about it!

These symptoms she was having could very well have been caused by the Botox. Her last injection was a month before she passed away—June 5, 2005. In January of this year I read some newsletters about Botox. I pulled Kelsey's medical files and noticed—coincidentally--that the first time she choked and we called the ambulance was just two weeks after she'd had the first set of Botox injections.

And here is another coincidence. The doctor who gave Kelsey the Botox injections is no longer at the hospital and furthermore, the hospital is no longer administering Botox to anyone, period. (My girlfriend's child is a patient with cerebral palsy and she told me.) We had just started to see this doctor; Kelsey was a brand new patient and the Botox treatments began just one month after seeing him.

The doctor who administered this treatment is a physiatrist—a specialist who provides care to individuals with any temporary or permanent loss of function. Of course we trusted his judgment and his course of action.

The fact that there was no disclosure is really upsetting. When Kelsey first choked, nobody associated it with Botox. The worst part is that she still got treated after that happened. I don't think the medical community knew enough about it and everybody has their own area of concern. I think this is a very common problem—a specialist prescribes a drug for one issue, another specialist prescribes a drug for something else and nobody looks at the whole body. One drug masks another and sometimes you can't figure out the evil drug. Especially when you are taking a cocktail of drugs like my daughter did.

But this physiatrist should have been looking at the whole picture…

I always thought that Kelsey would live to be in her 20s--at least. The morning she died, I had fed her breakfast and she was fine. Then I stretched her out to do some exercises while I cleaned the house. I had a house full of kids—my son had friends over. I checked on her every 10 minutes. When I rolled her over onto her back, she was gone.

More BOTOX & MYOBLOC News
Paramedics were there within five minutes and they tried to revive her—at the time it seemed an eternity. I called 911 at 10am and she was pronounced dead at noon. Kelsey was an organ donor: her eyes and muscles were used (her organs were already shut down).

We have a foundation set up for her that benefits handicapped children in areas that are not met by traditional resources such as camps, high school scholarships, hearing aids (not covered by insurance) and more. If you want to know more about it, contact us at kelseysharrington@sbcglobal.net .

I think there could have been more concern and attention paid. You shouldn't give Botox to a child in her situation. I read that this drug was pulled from the market in Europe in 2002. Why was she given this stuff two years later? The autopsy said Kelsey died of severe retardation and natural causes. Her heart stopped. I didn't know that you can die of retardation at 10 years of age.