Sandra's son suffered a massive brain injury and he was given Botox to control muscle spasms in his arms and shoulders. But Sandra believes that the huge dose he was given (900 units) caused him to lose the ability to swallow; as well, she thinks this deadly toxin migrated to his brain. 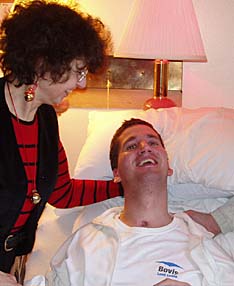 "On January 27, 2006 my son Jonathan was a regular college kid, but sometime overnight he threw up in his sleep and nobody could wake him the next morning (his sister and girlfriend tried)," says Sandra. "My daughter called 911, but by the time the paramedics arrived, it was too late. He suffered a massive brain injury -- the same you would get from drowning -- due to lack of oxygen to the brain."

Sandra says that at first, some people thought he was brain-dead. He was in a coma for a few weeks and had a lot of complications. But by May 16th, Jonathan was well enough to leave the hospital and go to a nursing home. "A neurologist met him and did an evaluation on my son," she says. He recommended Botox injections to control spasticity (muscle spasms) in his arms and shoulders and a baclofen pump to control the spasticity in his legs."

At this point, Jonathan could not feed himself, but he began therapy and was gradually improving. "He started talking and responding appropriately; he recognized his family and friends and the people who were taking care of him," says Sandra. "At first he was receiving only liquids from a feeding tube but he graduated to pureed foods then 'mechanically soft' foods from a spoon or fork, and by July he was drinking from a cup.

"On July 21 he was given 900 units of Botox -- an amount right off the Richter scale. My son never spoke again.

Jonathan had a baclofen pump implanted in his abdomen to control muscle spasms in his legs. From that point on, he went back to a feeding tube only and couldn't swallow anything because the muscles in his throat can't differentiate between sending food to his lungs or his throat. The muscles are so weak now that they can't differentiate between a breath of air or food --so food goes into his lungs and that causes aspiration pneumonia."

Sandra says that, according to the FDA, 15 deaths have been caused by Botox that in turn caused aspiration pneumonia. In January of this year, Public Citizen sent a letter to the FDA, asking the agency to require that Allergan and Solstice Neurosciences issue a "warning letter to physicians regarding all formulations of botulinum toxin (Botox and Myobloc, respectively). This letter would alert physicians to serious problems, including hospitalizations and deaths, resulting from the spread of the toxin from the site of injection to other parts of the body."

However, Public Citizen says it hasn't done enough. "The FDA has ignored its mission to adequately warn the public about the known dangers associated with the use of Botox," said Dr. Sidney Wolfe, director of the Health Research Group at Public Citizen. "We should, at the very least, be following the good example of the European Union, which has issued a series of warnings since 2005 to alert doctors and patients about the need to monitor those receiving these products for signs of side effects."

More News
Sandra has done a lot of research and talked to a lot of people about Botox since her son's possible overdose of the toxin. "I talked to a research neurologist specializing in botulism toxin," she says. "He told me that at the end of February, two studies were released where botox was injected into cats and rats. In both cases, Botox migrated to the brain and the larger the dose, the more likely it is to go into the brain. What the researchers DON'T know is what effect this migration into the brain is going to have long-term.

Did that happen to my son? Apparently a spinal tap will determine if Botox is in his spinal fluid and likely in his brain. I was always told that Botox was safe -- the doctors reassured that it was fine. I wonder what they think about it now."