Despite recent FDA warnings of proven paralysis and death from the popular product Botox, a fierce competitor brandishing a similar injectable toxin is on the horizon.

The most recent pharmaceutical company to announce its intention to muscle in on Botox's chokehold on the cosmetic enhancing and therapeutic market, is a French firm. Ipsen S.A. produces Reloxin, which is based on the same botulinum toxin type A compound as Botox. Ipsen sold the marketing rights to Reloxin in the U.S, Canada and Japan to US based Medicis Pharmaceutical Corp. in 2006. 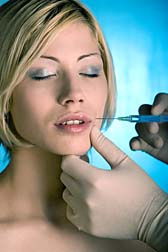 Ipsen already distributes a successful Botox-like injectable in Europe, under the name of Drysport, and produces over 20 other types of drugs that are marketed to specialists working in the therapeutic fields of oncology, endocrinology and neuromuscular disorders.

The strategy of the Ipsen-Medicis partnership consisted of filing Reloxin with the Food and Drug Administration during 2007, with their eye on becoming a serious competitor to Botox manufacturer, Allergan, in 2008. But in January of this year, the FDA rejected Medicis' original Biologics License Application over a lack of administrative details relating to sponsorship and ownership of the filing.

Resolute, Ipsen and Medici have just resubmitted the application, on March 17, to the FDA in the aesthetics department of dentistry and dermatology products. The standard FDA response time is 10 months.

"We continue to believe the Reloxin BLA is strong, and anticipate entering the growing, multi-million dollar aesthetic botulinum toxin market in the US upon FDA approval," Jonah Shacknai, chairman of Medicis, said.

It is easy to understand the Ipsen-Medicis determination to break into the lucrative market for Botox applications. Despite clear FDA guidelines on the use of Botox, the sky seems to be the limit. US doctors are free to prescribe Botox for non-approved FDA use as long as manufacturers do not publicize them. Confirming extra-curricular Botox activity, sales for its cosmetic use increased 29 percent last year, while therapeutic procedures grew by 19 percent. Allergan projects to sell $1.365 billion this year.

Botox is also authorized to treat cerebral palsy in children in about 60 countries, but not in the US, where the drug has been blamed for the deaths of four children treated for severe arm and leg spasms consistent with cerebral palsy.

Allergan is also under scrutiny from the FDA after reports that the botulinum toxin is known to spread from its point of injection to nearby areas of the body, risking potential respiratory arrests. The government agency is reviewing over 180 reports, including 16 fatal cases, of poisoning by botulism. Symptoms include paralysis, muscle weakness, difficulty swallowing and breathing, and slurred speech.

For the Allergan - Medicis rivalry, a lengthy investigation means a longer review period for the approval of the rival Reloxin.

More News
It is not the first time Allergan and Medicis have gone beak to beak. In 2006, Allergan initiated a free giveaway of their facial-filling product Juvederm to the users of the similar Medicis top-seller, Restylane. Robert Grant, president of Allergan Medical, said the goal was to make Juvederm a household name equal to Botox and the promotion was likened to the war between Coke and Pepsi. The fillers are classified differently from Botox in that they temporarily add volume to the skin through injections of transparent gels of hyaluronic acid, a complex chain of sugar molecules.

If Reloxin breaks through the Botox monopoly, physicians, and by extension end consumers, can look forward to lower prices for injections of cosmetic and therapeutic treatments. And Medicis is respected by dermatologists for its marketing skill while the French equivalent of Reloxin, Drysport, is said to have a comparable safety and efficacy record to Botox.

Should this be double cause for worry, given the ongoing FDA investigation, the top-level black box warning inside packaging demanded by advocate group Public Citizen, and the recent deaths and disfigurements due to botulinum toxin injections?

Before the field floods, if you have been victim to Botox side effects, please see your doctor and/or seek out legal guidance.