More BOAT ACCIDENT AND MARITIME LAW News
A man from New Kent, Virginia, has been arrested after a recent boat accident that injured eight people, reports the Richmond Times-Dispatch. 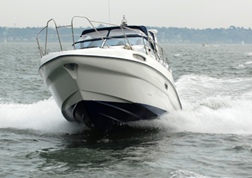 According to the news source, 32-year-old Christopher A. Parker is currently being held without bond on two counts of felony maiming and operating a boat under the influence. Authorities claim Parker was operating the 20-foot boat when it collided with a buoy on the James River, injuring all eight passengers.

Henrico County officials said that one patient was taken to VCU Medical Center via helicopter and four ambulances took the others to the hospital.

Documents from Parker's arrest indicate that the man smelled of alcohol and had dilated eyes when he was approached by authorities on the north bank of the river the night of the accident.

The Virginia Department of Game and Inland Fisheries said that the injuries to the passengers on board the boat were not considered life threatening, reports The Associated Press.

Parker appeared in Henrico General District Court with a cast on his right wrist.

If you or a loved one have suffered losses in this case, please click the link below and your complaint will be sent to an accidents lawyer who may evaluate your Boat Accident and Maritime Law claim at no cost or obligation.
Request Legal Help Now