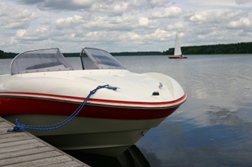 The 52-year-old Klingler was taken to the Moses Ludington Hospital in Ticonderoga, New York, by Hague EMS, where he was reportedly treated for chest and head injuries. He was later transferred to Fletcher Allen Trauma Center in Burlington, Vermont, for further treatment.

Warren County Sheriff's deputies told the Albany Times-Union that the investigation into the boat accident was ongoing.

If you or a loved one have suffered losses in this case, please click the link below and your complaint will be sent to a personal injury lawyer who may evaluate your Boat Accident and Maritime Law claim at no cost or obligation.
Request Legal Help Now