More and more Americans are pedaling bicycles—sometimes for recreation and sometimes for transportation. Unfortunately, according to attorney George Choulos, it means more cyclists are tangling with motorists. The consequences for the cyclist can be disastrous. Up to 50 percent of the litigation Choulos handles at his San Francisco firm involves clients who have been injured in bike accidents. "Maybe it is just because I am involved in the bicycling community and hang around bike shops that we tend to get those kinds of cases," says Choulos. 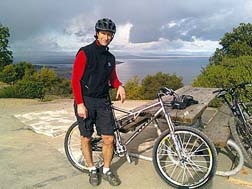 Lean and trim, Choulos himself happens to be an avid cyclist and frequently spends the weekend wheeling through the California countryside. "I think cyclists feel more comfortable meeting with an attorney who is also a cyclist and who understands how bike accidents happen," he says.

"My opinion is that cyclists are particularly intelligent, and they tend to be very evolved people," says Choulos. "But, I think they sometimes have a false sense of confidence and think they can go head to head with an insurance adjuster that has dealt with literally thousands of claims."

A California bike accident victim is, in Choulos's opinion, going to be at a tremendous disadvantage trying to settle a claim on his or her own. "A bicycle attorney, who is familiar with these kinds of cases, works on a contingency fee basis and is knowledgeable about cycling, is really important," he says.

'I Didn't See Him' is No Excuse for Drivers

"The fact is motorists just don't see people on bicycles," says Choulos. However, failure to see a cyclist does not excuse drivers from liability for injuries caused in an accident with someone on a bike.

As an experienced cyclist, Choulos says wearing bright clothing is important for safety reasons. "Some people say," Choulos jokes, "that cyclists look like tropical fish with all the bright colors they wear but the fact is the more visible the better."

The type of clothing a cyclist is wearing could also be a factor in determining damages at litigation time.

"That's an example of the kind of issue an attorney who knows California bike accident law will want to consider. You don't want anything to come as a surprise during the litigation," says Choulos.

It is also important to know the rules of the road. Many accidents happen when drivers fail to yield to cyclists riding in the bike lane. "The bicyclist will often be blamed by a police officer at the scene, who is not aware that bicyclists in bicycle lanes have the right of way," says Choulos. "There are a lot of reasons you want an experienced attorney in order to get reasonable and adequate compensation for the losses."

When two wheels collide with four wheels, the injuries to the cyclist can be extremely serious. "Your average cyclist is wearing nothing but spandex to protect them," says Choulos. "They may suffer loss of earnings, or sustain permanent injury. These things deserve to be compensated and usually it is necessary to pursue the driver for compensation."

"You can have a 'solo accident' where there is no vehicle involved but there is a catastrophic failure of a bicycle part," says Choulos. "I have pursued and been successful in litigation against bicycle manufacturers and parts suppliers."

"My father and I and Claude Wyle started the firm in 1982 and we have been together ever since," says Choulos. "We have a philosophy of trying to do good for the little guy against powerful insurance companies and manufacturers.

"We enjoy representing people and trying to make a difference in a positive way," Choulos says.

George Choulos earned his undergraduate degree at the University of California at Berkeley (1979) and did his J.D. at the University Of San Francisco School Of Law (1982). He is a partner at Choulos, Choulos and Wyle and also does Premises Liability, Mass Torts, Dangerous Highways, Insurance Bad Faith, and Wrongful Death litigation.

Click to learn more about LawyersandSettlements.com
LawyersandSettlements.com - A trusted, independent legal news provider bringing quality news and information on legal cases and lawsuits filed in the United States of America to its readers since 2002. Over 650,000 legal help requests including Accidents, Defective Product Cases, and Personal Injury Cases have been forwarded to lawyers all across to the country.