No one conversant with environmental law remains so without a full understanding of the risks associated with asbestos, a substance once widely-used for its insulating properties in spite of growing evidence that asbestos is a carcinogen. While asbestos is still employed in some industrial applications, its use is tightly regulated. This, unlike the backdrop of decades past when policies and protocols around asbestos were, as alleged in scores of lawsuits, found lacking. To that end, a mesothelioma lawsuit filed by the widow of an asbestos mesothelioma victim speaks to the risks associated with direct, as well as indirect contact with asbestos fibers. 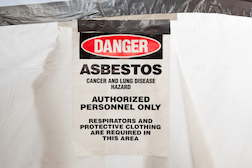 A mesothelioma lawsuit in Alameda County wrapped up last month with a verdict favoring the plaintiff, together with a jury award totaling $12.9 million. The factual elements of the case determined that asbestos mesothelioma victim Mark Lopez and his family resided in employee housing owned and provided by The Hillshire Brands Company, the defendant named in the case. Hillshire, a sugar refinery, was located a few hundred yards from the abode the Lopez family called home.

Court heard that decedent Mark Lopez’ father worked at the refinery for some 40 years. Mark Lopez, according to Court filings, lived in the dwelling with his father and other members of his family from 1954 through 1972. Documents associated with the lawsuit asserted that asbestos was routinely used at the refinery, and that Hillshire employees actively worked with asbestos at the facility without safety precautions. Plaintiffs asserted that lack of precautions fostered contamination of the surrounding area, as well as the Hillshire-owned homes in which asbestos workers and their families resided.

Plaintiffs also asserted that workers routinely and unknowingly transported asbestos fibers on their work clothes to their homes, exposing other family members.

While it is rare for mesothelioma and asbestos disease to originate from second-hand exposure to asbestos, it is not without precedent. Plaintiffs representing the estate of Mark Lopez noted that Lopez, as an adult was diagnosed with mesothelioma, an asbestos-related disease that affects the outer linings of the lungs and other organs. There is no, known cure. Lopez succumbed to mesothelioma at the age of 61. His estate sued Hillshire for negligence on April 15, 2014.
Following a trial that lasted a little over three weeks the jury, on August 16 of this year returned a verdict for the plaintiff after about four hours of deliberation. Economic damages were awarded to the tune of $1,958,461 with non-economic damages awarded at $11 million for a total of $12,958,461.

More ASBESTOS MESOTHELIOMA News
There was no word on whether Hillshire intended to appeal the verdict. In its defense, Hillshire asserted that decedent Mark Lopez was not exposed to asbestos from their refinery, and if he was, such exposure wasn't sufficient to cause mesothelioma. Hillshire denied any negligence in how they employed asbestos in their refinery, and further asserted that the manufacturers of asbestos products used at the refinery should be made to share in any liability.

Meanwhile the continued study of mesothelioma and asbestos disease as it relates to the environment and environmental protect continues, and has for some time: as this 2009 study published in the British Journal of Cancer (04/07/09) will attest.