There is a myth out there about asbestos. Oh, it's a health hazard all right, and as a known carcinogen it can cause asbestos mesothelioma. However, the popular belief that if you have asbestos in your building you've got to get it out of there, could be flawed.

In fact, many experts agree that it is best, provided asbestos is properly contained, to leave it right where it is. It's when you disturb the asbestos, where you get into trouble.

While asbestos has attained the status as one of the most dangerous and hazardous products out there, it has not been banned in North America. While it is banned outright in many other countries around the world, political will has not been sufficient to affect the same ban here. Thus, while the use of asbestos is severely restricted today, its use is still sanctioned in many settings, usually in the industrial and manufacturing sector. 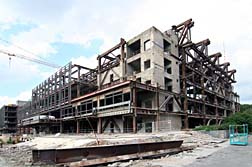 There, the crime is not in the use of asbestos in manufacturing (such as brake components for vehicles, for example) but rather the management of that hazardous material, and the protection of asbestos workers, from the harmful effects.

When used in manufacturing, or when disturbed in a removal or renovation project, tiny asbestos fibers can be inhaled or ingested. Workers and trades people who are unprotected risk serious injury, and employees who wear their work clothes home put their families at risk. Fibers can ride fabric to a worker's residence and get into the air at home, or into the car where the entire family congregates in an enclosed area such as a car, which can only magnify the issue.

Companies and corporations have been sued not for the use of asbestos, but over their failure to protect workers and others from the dangers of asbestos mesothelioma, which is a cancer of the mesothelium, the protective lining that contains the majority of internal organs. Given the mesothelium's close proximity, and relationship with a wide variety of vital organs, one can easily understand how serious asbestos mesothelioma, and asbestosis, is.

It's the renovation environment that causes the most concern, given the requirement for expertise in properly containing wayward asbestos fibers, once disturbed. To that detail the proper management, containment and removal of asbestos is a rigorous and arduous process which, done safely and to according to toughened protocols, is time-consuming and expensive, but necessary in order to protect workers, trades people, even passersby—and ultimately, those who will eventually inhabit the renovated building.

However, outside of a renovation, should asbestos be disturbed, or removed for asbestos sake?

Not so, according to the Congressionally-charted National Institute of Building Sciences.

"There is some evidence to indicate that removal of asbestos-containing building products from schools and other facilities may be counterproductive. Whether the removal process involves dry or wet disruption of the in-place asbestos, data shows that a substantial quantity becomes resuspended and recirculated throughout the building. Following removal, weeks and sometimes months must pass before ambient air levels of friable (crumbling) asbestos fiber drop below acceptable levels."

"Improper asbestos removal places workers, building occupants, teachers and especially children at risk of serious health injury. It is well documented that the improper removal of asbestos can be far more hazardous than if the asbestos is not removed at all."

This most recent statement is a throwback to a recent story involving the asbestos removal at a public school, which was undertaken in an effort to rid the building of asbestos, just because it was there. Left undisturbed and outside the access of the student body, these revised positions suggest that it may have been safer to leave well enough alone.

Ironically, the contractor hired to remove the asbestos, did so at a time when the panic over asbestos was fresh, and before current disposal protocols were in place. As a result, workers were not adequately protected.

More News
In an effort to keep the student body and staff free from harm, one of the workers died from coming into contact with the asbestos.

Early symptoms of mesothelioma can include chest pain, fatigue, and shortness of breath, hoarseness, cough, fluid retention and abdominal swelling.

The emergence of symptoms, however, can take years. The time between exposure and the appearance of symptoms can range anywhere from 20, to 50 years. A worker, and his or her family could have become exposed and never realized it—especially given such an extended incubation period, that would encompass many decades over which the dangers of asbestos were assessed, and addressed.

Even if a worker ceased working at a plant 30 years ago, or changes were made to a compromised environment at the time, the disease might just be rearing its head now.