It’s a situation that is the closest one might come to a crystal ball: the sentencing of a salvage company owner who allowed the demolition of an asbestos-laden tire plant without protecting his workers from asbestos fibers. As it takes asbestos mesothelioma some 30 years to emerge in most cases, it is not beyond the realm of possibility that new asbestos claims may well be stemming from this incident three decades from now. 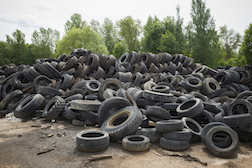 The US Attorney’s Office for the Western District of Kentucky launched an asbestos lawsuit against the owner of S & S Salvage LLC after employees of the salvage company were found to be engaged in the demolition of a former Goodyear tire plant without breathing apparatuses or respirators. Insulation materials believed to contain asbestos were also not properly wetted down, in violation of the Clean Air Act.

Timothy J. Smith pled guilty to a misdemeanor violation of the Clean Air Act and was sentenced to 90 days in jail by Magistrate Judge H. Brent Brennenstuhl, followed by two years’ probation.

Given the carcinogenic properties of asbestos and the potential for asbestos cancer and Mesothelioma, asbestos abatement is taken seriously and enforced when violations are found.

According to court documents, a local inspector noted that a crew working for S & S Salvage was seen in the throes of demolishing the former tire plant located in Madisonville, Kentucky. The work, it has been reported, was taking place in violation of a rule that requires the submission of written notice ten days prior to the commencement of demolition on any structure containing asbestos.

On two previous occasions, the defendant had been cited for not providing proper advance notice before commencing demolition projects. Those enforcements were conducted by the Kentucky Department of Environmental Protection.

With regard to the 2014 incident which eventually landed the salvage company owner in jail, the inspector returned a month later to witness the work continuing. Boilers were dismantled and asbestos-laden insulation was being removed and tossed into dumpsters. The insulation was not dampened down as is required – nor were salvage workers wearing any kind of breathing apparatus to protect them.

More ASBESTOS MESOTHELIOMA News
“These federal safety guidelines for hazardous materials exist to protect us – to protect workers and protect the community,” US Attorney John Kuhn, with the US Attorney’s Office for the Western District of Kentucky, said in a statement on December 2. “Our fervent hope is that 90 days of incarceration will encourage Mr. Smith and others to think long and hard before once again violating regulations that ensure worker and community safety.”

In recent years a host of plaintiffs have come forward with asbestos claims following alleged exposure to asbestos in plants, industrial environments and the ship building industry in an era where asbestos was more commonly used, without benefit from a wide-ranging understanding of the carcinogenic properties of asbestos.

It takes mesothelioma, asbestosis and other forms of asbestos cancer 30 years or more to emerge, in most cases.

Posted by
R Morgan
on December 8, 2016
I am not conversant with the environmental laws in the US and it seems to me it is applied state by state. In the UK and other European states it is universal.From the report it seems the standard applied is minimal and far from adequate to protect workers or the public in the area. US needs a Federal approach or problems will simply move over state lines and grow. What is the present position in the US ?

Click to learn more about LawyersandSettlements.com
LawyersandSettlements.com - A trusted, independent legal news provider bringing quality news and information on legal cases and lawsuits filed in the United States of America to its readers since 2002. Over 650,000 legal help requests including Personal Injury Cases, Defective Product Cases, and Drugs & Medical Cases have been forwarded to lawyers all across to the country.