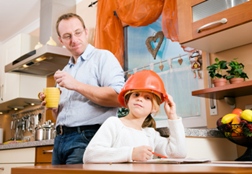 According to the Madison Record (1/11/16), Charity Johnson was diagnosed with mesothelioma in 2013 and is likely to die a premature death as a result of asbestos exposure. Although Johnson did not work around asbestos, her father allegedly did during his time as a welder, auto mechanic and construction worker. Johnson’s lawsuit alleges her father frequently brought home asbestos dust on his clothing.

More than 50 companies are named in the lawsuit (case number 15-L-693, St. Clair County Circuit Court), which alleges the defendants were negligent and committed conspiracy and willful misconduct.

Meanwhile, Yellowstone County agreed to pay $650,000 to settle a lawsuit brought by a former janitor who alleged he developed mesothelioma as a result of his work. The Billings Gazette (12/21/15) reports that Lauren DuPuis was diagnosed with mesothelioma in 2014 and filed the lawsuit in 2015. From 1987 to 1999, he worked as a janitor at a courthouse, where he believed he was exposed to asbestos-containing products. In 2000, the courthouse reportedly underwent asbestos abatement processes to remove most of the asbestos in the building.

Although DuPuis died in July 2015, his attorneys continued with mediation rather than going before a judge. Yellowstone County agreed to pay $650,000 to DuPuis’ estate.

More ASBESTOS MESOTHELIOMA News
Mesothelioma is a fatal condition linked to asbestos exposure. Patients can develop symptoms of mesothelioma decades after being exposed to asbestos fibers, although sometimes symptoms develop in 10 years or less. In 2015, NPR released a report on asbestos warning of a “third wave” of asbestos exposure, those people who are affected by asbestos that was dormant but has since been disturbed, such as asbestos in cement.

A study published in PLOS One (12/14/15) examined information from the SEER database - including more than 14,000 patients - from 1973 to 2009 to examine various mesothelioma treatments. Researchers found that although there have been developments in treatment techniques, mesothelioma patients have not experienced improved prognosis in four decades. But they did find that cancer-directed surgery was associated with better survival.

Researchers also found that being female, younger and receiving treatment at early stages were factors in longer survival.

Posted by
Bob Morrissey
on April 26, 2016
You what is worse than the asbestos? The lawyers
Posted by
STACEE
on March 21, 2016
PLEASE HELP US. MY DEAR DADDY PASSED AWAY FROM MESOTHETHELIOMA LUNG CANCER WHILE HE WAS GOING THROUGH HIS LEGAL BATTLES. HE DID RECEIVE SOME SETTLEMENTS, NOT LARGE ENOUGH AS FAR AS I'M CONCERNED!! AND AS HIS EXECUTRIX TO HIS ESTATE, I WAS ADDED TO HIS CASE ONCE HE PASSED, ALONG WITH MY BROTHER. I DON'T FEEL THAT HIS ATTORNEY HANDLED HIS CASE PROPERLY AT ALL. HE DIDN'T GET VERY LARGE SETTLEMENTS LIKE I HAVE BEEN HEARING ABOUT AND HE WORKED FOR COMPANIES LIKE WESTERN ASBESTOS. HE AND HIS ATTORNEY PROVED HIS EMPLOYMENT HISTORY WITHOUT ANY DOUBT WITH MANY OTHER COMPANIES THAT HAD EXPOSED HIM. I'M NOT SURE OF ALL THE PLACES HE HAD CLAIMS AGAINST BUT THERE WERE A LOT SO HE SHOULD HAVE BEEN GRANTED WAY MORE IN SETTLEMENT FUNDS. THE LARGEST AMOUNT MY BROTHER AND I RECEIVED WAS ONLY LIKE $7,900 EACH AND LIKE I SAID MY DADDY LOST HIS LIFE BECAUSE OF THIS! MY BROTHER HAS ALSO PASSED SINCE ALL OF THIS, SO NOW MY NIECE AND I GET WHAT LITTLE THE BANCRUPCY COURTS ARE ALLOWING THE COMPANIES TO SETTLE WITH US. OH AND MY DAD'S ATTORNEY SIGNED ON WITH HIM AT 25% AND WHEN HE PASSED HIS ATTORNEY MADE US SIGN A NEW AGREEMENT AT 33%. ISN'T THAT NICE? HAVING TO SPLIT ANY MONEYS BETWEEN THREE NOW AND UPING HIS PORTION. UGH I SWEAR. MY MOM IS SO WORRIED THAT I WILL END UP WITH IT BECAUSE SHE USED TO SOAK HIS WORK OVERALLS IN THE BATHTUB WHERE I BATHED AS A BABY EVERY EVENING. IS THAT THE FAMILIA LAW? OH I SURE HOPE NOT, MY POOR DADDY WAS IN SUCH MISERABLE PAIN IN THE END, BLESS HIS HEART AND REST HIS SOUL.
Posted by
Susanne Furtado
on January 24, 2016
I filed a claim a couple of years ago and never heard anything. My mother died of asbestos in her lungs which they called pulmonary fribrosis. Dad worked in the welding industry all of his life from MN. to CA. Mother washed his clothes and she was very exposed. I was her caregiver for the last 2 1/2 years of her life in CA. She was on oxygen the last few years of her life. Dad died of lung condition and leukemia. What has happened to my claim on my folks?
It should be under my name. Mom's name was Mary Kollmann and Dad was Archie Kollmann.
Please advise if we are a part of this settlement.