An asbestos lawsuit that has been on the books since 2008 was granted a new lease on life in February when the state court of Pennsylvania denied a motion for summary judgment advanced by the defendant, Oglebay Norton Corp. Oglebay had argued that the Occupational Disease Act for the state of Pennsylvania hampers the suit. 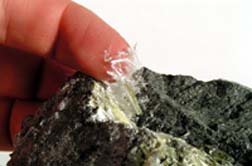 However, the motion was denied.

The asbestos mesothelioma lawsuit is Kathleen Tooey v. AK Steel Corp., a case well-known in legal circles for the twists and turns it has taken in the seven years since originally appearing in the legal pipeline. Kathleen’s husband, John, worked for Ferro Engineering, a division of Oglebay Norton Marine Services Co. for a period of 18 years spanning from 1964 through 1982. John Tooey was employed in the sales department of a firm that manufactured so-called “hot tops” products used in the molding process for molten steel.

The Tooey asbestos lawsuit was originally threatened by the Workers’ Compensation Act (WCA) of Pennsylvania, which holds that job-related asbestos claims need to be filed within 300 weeks of a plaintiff’s last relevant employment in order for the exclusive remedies of the WCA to apply.

John Tooey’s asbestos mesothelioma appeared well past the 300-week window. In 2013, the Pennsylvania Supreme Court ruled that common law claims against employers for asbestos exposure were not foreclosed by the 300-week provision, thus remanding the Tooey case back to Allegheny County state court.

More ASBESTOS MESOTHELIOMA News
Oglebay Norton then argued that the case did not qualify under Pennsylvania’s Occupational Disease Act. However, state judge Michael F. Marmo rejected the defendant’s motion for summary judgment in the case. An attorney for the plaintiffs noted that Judge Marmo’s order reaffirmed the Supreme Court’s position that the legislature, by enacting a remedial statute specifically designed to benefit employees, did not intend to leave a certain class of employees, who suffered the most serious work-related injuries, without any redress under the acts or at common law.

For his part, Judge Marmo did not issue the reasoning for his denial.

The asbestos compensation lawsuit is Kathleen Tooey v. AK Steel Corp., Case No. 08-005721, in the Court of Common Pleas of Allegheny County, Pennsylvania.