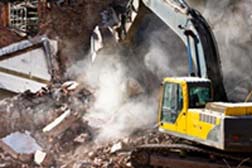 Austin kept some samples of this landfill mix, in the case that an asbestos attorney accepts his claim and requires that it be tested for asbestos.

“We called these pits the Mud Farm,” Austin adds. “The company stockpiled the mix for about a year and during the three years that I worked there I saw it taken away twice. It was a mountain of dirt, the height of a four or five storey building. It took months to haul if off with 10 trucks that transported the mud 12 hours a day, 5 days a week. Then another mound would be stockpiled.

“Anyway, my concern is that I got a rash within a month of working there, all over my legs. I know this isn’t a side effect of asbestos but it was very red and irritating. Obviously I had a reaction from something so I am concerned that years from now I might have respiratory issues. I complained to my doctor, who looked at my rash and simply told me to keep away from the stuff, which meant keep away from your job. Easier said than done.

“The rash would come and go, depending upon what kind of equipment I was operating. I drove a wheel loader, excavator and backhoe. And here’s another thing: I noticed that all the dump trucks that hauled the mud were new. After a couple of years all the paint was peeled off and the dump trucks were all about two years old; that is how corrosive this stuff is.”

Austin’s boss decided his doctor’s advice for him: he was fired for not wearing the company’s fire-retardant shirt. “Their maintenance program was pretty bad,” he explains. “The A/C was constantly breaking down in the tractor I operated so I had to open the windows and expose myself to all the chemicals in the air - which could have contained asbestos fibers. I told my supervisor that I had this rash and they needed to get the A/C fixed but that didn’t happen.

More ASBESTOS DRILLING MUD News
“We were issued heavy long-sleeved shirts that were fire-retardant. One day it was so hot I had to take it off, so I just wore my t-shirt - the A/C was broken again. I got fired - just two days before Christmas - because I took my shirt off. Ironically, we were trained for heat exhaustion, and if I kept this shirt on, I would have been treated for heat exhaustion. To add insult to injury, they refused to pay me unemployment insurance so I filed a complaint with the California labor board because I knew this was a violation of the California labor law. I went before the unemployment appeals judge and won. It was ridiculous for the company to do this, when they are making billion-dollar profits. If they are this callous, it wouldn’t surprise me if they know their workers have been exposed to asbestos.”