Daphne M. took Accutane for one year, from 2008 to 2009. Within a few months, Daphne started experiencing up to 20 bowel movements a day. Although she no longer takes the acne medication, she still suffers from suspected inflammatory bowel disease [she is currently waiting for a diagnosis]. Daphne is angry that she suffered so much and that Accutane is still available in Canada. 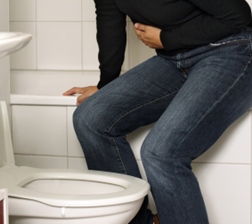 "I was prescribed Accutane because I had tried everything available [to treat acne]," Daphne says. "Antibiotics, creams and gels and nothing worked. This was my last resort. I was 32 at the time, so I was a bit older, and I was getting a lot of scarring from the acne.


"I live with constant abdominal and rectal pain, bloating, gas, and bowel movements… I'm on the toilet when I could be with my kids"
"I went on Accutane and it didn't really work for me. I took it for about a year and it made me feel sick most of the time. I kept on taking it because I was told it can take six months to a year to work and because it was my last resort. I was sick of acne and embarrassed by it. But Accutane never did work for me.

"I went through hell and I'm still suffering from it. I could hardly eat anything without it going through me. I was hospitalized with horrible pain, dehydration, bloating, ileitis and blockages in my intestine. I would go in for pain management and rehydration. That's when the doctors started ordering the tests.

"That whole year, I was in and out of hospitals. My last test was just before I stopped taking Accutane and I was in hospital for a partial blockage after I stopped Accutane. Doctors haven't ruled out what they suspect is Crohn's Ileitis. But, when the colonoscopy was done, I had to stop taking Accutane for two weeks prior so my symptoms weren't as bad. When they did the colonoscopy, they didn't find anything. The doctor said they have to find the problem during an episode, so it can take an average of seven years to diagnose.

"The symptoms aren't as bad as they were, but that's because I've learned to manage the pain. I follow a Crohn's diet to avoid suffering. If I eat vegetables, I suffer. I can't eat a hamburger or I'll be sick. I still have the problems but I manage things through diet and I suffer because there's not a lot I can do. I could go to the hospital for the pain, but I stay home because there's really nothing they can do besides give me an IV.

"I will go to the bathroom five times or more a day. There's nothing I can do about it. I can't hold down a full-time job. I work one-hour days but I still call in sick because I can't leave the toilet or because I'm too weak or in too much pain and can't get out of bed. There are days I can hardly function. I've never been like this before.

More ACCUTANE IBD News
"It makes me mad that no one made the correlation between Accutane and my problems. My friend was watching TV one night and told me about an advertisement she saw about Accutane and developing bowel symptoms. I saw the ad and then went online and found information. The more I read about what other people went through, the more I thought that it was what I went through.

"I live with constant abdominal and rectal pain, bloating, gas, frequent bowel movements and cannot eat many of the foods I used to enjoy.

"Had I known about this risk, I wouldn't have taken Accutane. I wouldn't have risked that to clear up my face. I would tell other people not to take it. My brother is a pharmacy technician and he told me Accutane is still being prescribed [in Canada]. I live with acne, but it's not worth the pain, suffering, invasive tests and time robbed from your life. I'm on the toilet when I could be with my kids. There are other things you can do for acne; stay away from Accutane. I'm angry that it's still available here in Canada."

Posted by
Joe Hendrickson
on August 1, 2012
I'm so angry about my accutane experience as well.

I was a very stable, passionate guy until taking accutane. I only took it two weeks but had violent side effects and mood swings. It's been 3 years since I've stopped, and my symptoms have only gotten worse. Constant fatigue, IBS-C, anxiousness, panic attacks, low blood sugar, low libido, nightmares, you name it.

I'm 23 years old. Have spend the majority of my 20s trying to recover from this sick drug. Have maintained a paleo/ketogenic diet to some positive result for the last 8 months. ill be trying hydrotherapy as a last resort.

My prayers, support, and best wishes to you and all who are struggling with accutane side effects that have never gone away.