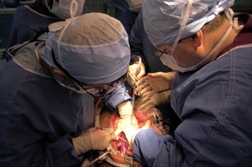 According to the news source, DVT is a blood clot in a deep vein in the thigh or leg—best known as "economy class syndrome" because of cases related to long flights—and can travel to the lungs and lead to dangerous clots called PEs.

"An increased risk of DVT and PE in patients with IBD has been evident for the past 75 years," co-authors Dr. Andrea Merrill of Massachusetts General Hospital and Dr. Frederick Millham of Newton-Wellesley Hospital, wrote in the study.

They added that although this increased risk was found, "most work in this area has not looked specifically at patients undergoing surgery." Due to the fact that surgery is common for people with IBD, getting a better idea of their level of risk for clots is important, according to the researchers.

According to the American College of Family Physicians, more than 600,000 Americans suffer from IBD, as Crohn's disease and ulcerative colities are two common forms of the disease.

In their research, Merrill and Millham looked at data from more than 2,200 parients with IBD and more than 270,000 patients without the disease who had surgery at US hospitals in 2008.

According to the news source, the rate of patients with IBD that developed DVT or PE after surgery was more than twice that of patients who went in for surgery that didn't have either one of the diseases.

Bloomberg reported that former actor James Marshall has claimed he ended his career because of complications from Accutane that included IBD.