Hospitals across the US and Canada that use the LivaNova PLC Stockert 3T heater-cooler system during open-heart surgery are warning patients—who had surgery as far back as 2011— that they may be at risk of a rare and potentially life-threatening bacterial infection called nontuberculous mycobacterium or ‘NTM.’ 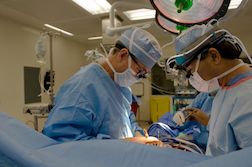 More than 600,000 patients who had open-heart since 2012 could be at risk. According to the CDC, patients exposed to NTM may take months to develop nonspecific symptoms, which can lead to a diagnosis being missed or delayed for years. About 60 percent of heart bypass surgeries use a heater-cooler device and that percentage is even higher in pediatric populations.

A Florida woman received a letter from the Arnold Palmer hospital in Leesburg, stating there may be complications from her baby’s heart surgery. Sabrina Silas’ daughter, age 5, had heart surgery when she was 14 months old.

Here is the letter, reported by the dailycommercial:
“The Centers for Disease Control and Prevention (CDC) and the Food and Drug Administration (FDA) recently notified health care providers across the U.S. that certain units of a device used during open-heart procedures, the LivaNova PLC Stöckert 3T heater-cooler, have been linked to cases of a rare bacterial infection caused by Mycobacterium chimaera, a species of bacteria known as nontuberculous mycobacterium or ‘NTM.’"

The Arnold Palmer hospital said it has replaced the Stockert system with another device. Consumer Reports (November 9, 2016) said The Mayo Clinic is notifying 17,000 heart surgery patients they could be at risk of infection from the Stockert 3T and a patient at its Rochester campus has contracted an infection.

Back in 2014 a heart-bypass patient at Greenville Memorial Hospital in South Carolina was found to be infected with NTM three months after his surgery. But three weeks after NTM was discovered, 74-year-old Henry Weinacker died. (A wrongful death lawsuit was settled in 2015.) Officials traced the bacteria to the heater-cooler device and the hospital stopped using the device in 2014.

FDA and CDC Stockert 3T Warnings
CNN reported (October 2016) that between January 2010 and August 2016, the FDA received 91 reports, and at least 79 confirmed, of patient infections worldwide associated with the 3T heater-cooler unit. In October 2015 the FDA issued a safety communication to health care providers “to heighten awareness about infections associated with heater-cooler devices and steps health care providers and health facilities can take to mitigate risks to patients.” The agency stepped up its warning in June 2016 and again in October, saying it had “received reports of patients…being infected with M. chimaera after undergoing cardiothoracic surgery that involved the use of the 3T.”

More STOCKERT 3T News
Despite warnings from the FDA and CDC, some doctors and hospitals are still unaware of NTM infection in heart-surgery patients. “We know there are infections out there that are going undiagnosed,” Michael Edmond, M.D., a hospital epidemiologist at the University of Iowa Hospitals told Consumer Reports. Heater-cooler contamination has been detected at that hospital. And Joseph Perz, Dr., P.H., an infection control expert with the CDC, said that “awareness remains much lower than it should be.” That’s not the case in Canada: Six Quebec hospitals are contacting more than 23,000 patients who have had open heart surgery since 2011 about a potential risk of infection.

The CDC has recommended that hospitals consider surveillance of patients who have undergone open-chest cardiac surgery involving the 3T heater-cooler device. Symptoms of infection with NTM include night sweats, muscle aches, joint pain, weight loss, fatigue and unexplained fever. If you or a loved one had open-heart surgery in the past five years and did not receive a letter from the hospital, you might want to give them a call to find out if the Stockert 3T device was used.