Taxpayer Dollars up in PFAS Smoke?

The U.S. Department of Defense estimates that PFAS cleanup on military bases will cost taxpayers billions of dollars.

The U.S. Government Accountability Office recently reported that the price tag to clean up per- and polyfluoroalkyl substances (PFAS) from nearly 700 military bases nationwide will probably exceed -- and cost taxpayers-- $2.1 billion. According to the Department of Defense (DOD) that price is up from $1.1 billion last year. 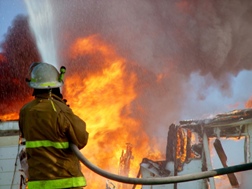 But chemical manufacturers are also on the hook as many firefighting foam lawsuits are fired against them – brought by people nationwide who lived near military bases where PFAS contaminated their water supplies and also brought by former fire fighters diagnosed with cancer.

According to the GOA report, cleanup costs include water treatment systems installations and providing bottled water to residents whose drinking water sources are now contaminated. But PFAS can take thousands of years to degrade: the chemicals stay in soil and can leech into water, hence the nickname “forever chemicals”. The U.S. Centers for Disease Control and Prevention studies have shown PFAS chemicals primarily settle into the blood, kidney and liver, and are likely in the blood of 98% of the U.S. population. The DOD cleanup could seem like putting a bandage on a bullet wound.

The Environmental Working Group (EWG) has identified 703 US military sites with known and suspected discharges of PFAS compounds. It says the June 2021 GAO report confirms how little progress the Pentagon has made in cleaning up legacy PFAS pollution, that the cost of remediation is going to grow and it could be decades before DOD cleans up the most contaminated sites.

More PFAS HEALTH RISKS News
Further, DOD officials said that regulatory uncertainty at the federal and state levels pose a significant challenge in estimating PFAS environmental restoration costs. To date, DOD has not included in its annual environmental reports to Congress future PFAS cost estimates, or the scope and limitations of those estimates.


Meanwhile, according to the GOA: DOD plans to continue using PFAS-containing foam aboard ships at sea—as allowed for by the National Defense Authorization Act for Fiscal Year 2020—until a PFAS-free alternative can meet existing requirements.