A new book details how the U.S. military’s use of firefighting foam containing PFAS chemicals has caused environmental damage and water contamination in Japan—over many years.

A new book detailing how the U.S. military is responsible for PFAS contamination in Japan is timely: firefighting foam lawsuits filed by local governments and water districts and former firefighters are on the rise across the U.S. The book and PFAS lawsuits claim, as Japan does, that direct exposure to PFAS chemicals, including contaminated drinking water, causes testicular cancer, kidney cancer, pancreatic cancer and other injuries. 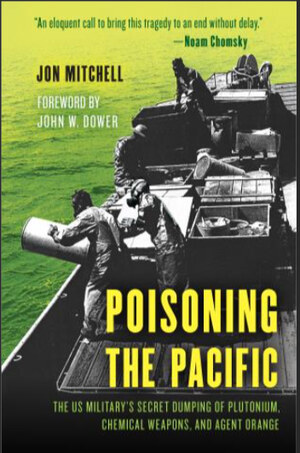 
British investigative journalist Jon Mitchell, based in Tokyo, spent many years researching his book, “Poisoning the Pacific: The U.S. Military’s Dumping of Plutonium, Chemical Weapons, and Agent Orange,” which documents the military’s “countless” releases of film-forming foam (AFFF) in Japan via accidents, leaks and crashes. He claims the U.S. has never released contamination information to the Japanese public, and that the U.S. Marine Corps has written guidelines which order their commanders not to tell Japanese officials about “politically sensitive incidents.” The Japanese government is now paying for filtering PFAS out of Okinawa’s contaminated drinking water, which Mitchell says was caused by the U.S. Military. The U.S. isn’t paying anything.

Mitchell’s book stems from thousands of pages of documents he secured from the U.S. military by way of the Freedom of Information Act, according to The Intercept. These documents include not only PFAS pollution—add widespread contamination with other hazardous substances, including chemical weapons, Agent Orange, jet fuel, and PCBs.


According to The Intercept, which has also been reporting PFAS contamination in the U.S. since 2015, agreements with the Japanese government do not require the U.S. to test for contamination in Japan or remove the chemicals when found. In a 2018 interview with Mitchell, The Intercept reported that 450,000 people in Okinawa have been drinking water from wells and rivers that run alongside the Kadena Air Base, the biggest American Air Force installation in Asia. “Some people drinking this water have extremely elevated blood levels of PFOS...The Okinawan people are furious and scared.”

(PFOS is a chemical in the PFAS family and was used by the U.S. military as an ingredient in firefighting foam for five decades until 2015, along with perfluorooctanoic acid (PFOA).


Mitchell told The Intercept that the U.S. has total jurisdiction over who can enter its bases, so Japanese officials can’t even sample the water on the bases. As recently as April 2020, the Marines are still contaminating the Japanese environment. Again, John Mitchell from The Intercept interview:

“A bunch of Marines were in quarantine because of the coronavirus in a hangar on Futenma Marine base in Okinawa. They decided to have a barbecue. The heat from the barbecue triggered the AFFF system. And then the Marines kind of panicked. The doors of the hangar had not been shut for 10 years, and they were impossible to close. So most of the foam escaped into the local community. When the fire team finally arrived, they didn’t have a key to the room to turn off the fire system. And so the sprinklers were firing for 25 minutes nonstop, and there was so much foam it went into the playground and the nearby river.”

You can’t make this stuff up. Mitchell discovered this incident via the USAF/US Freedom of Information Act. And, it gets worse:

More PFAS FIREFIGHTING FOAM News
A 2019 study by Kyoto University professors found high concentrations of perfluorooctane sulfonate (PFOS) in rivers passing through and around the Kadena Air Base and the Marine Corps Air Station Futenma. People who drink the tap water on a daily basis have higher concentrations of PFOS, PFOA, and PFHxS in their blood than people who do not drink the tap water. The study also found negative effects on the subjects’ cholesterol levels and liver functions. Perfluorohexane sulfonic acid (PFHxS) was found in the subjects’ blood at more than 53 times the national average.

Mitchell is also an advocate for victims to be compensated. He has made available to universities in Japan and the U.S. thousands of pages of documents to inform the public and help American veterans who are seeking support. Key documents and Veterans’ lawsuits can be found on Mitchell’s website.