A former volunteer firefighter diagnosed with testicular cancer has filed a PFAS/PFOA lawsuit similar to many other firefighters nationwide. They allege a number of firefighting foam manufacturers did not warn firefighters that their fluorochemical products contained PFAS and/or PFPS, which are toxic and carcinogenic chemicals. 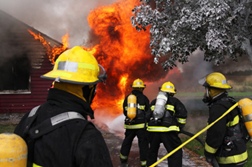 Another PFAS lawsuit, filed in early September by a California man in the U.S. District Court for the District of South Carolina names more than a dozen defendants, including 3M Company and Du Pont that either produced or sold the aqueous film-forming foam (AFFF). Slade Giles was exposed to PFAS in the firefighting foam while working as a firefighter from 2004 through 2020 and had a testicle removed in 2018, according to his lawsuit.

And a Nevada firefighter suffering from prostate cancer blames the manufacturers for his cancer developed during his work as a firefighter, mainly at McCarran National Airport where he used AFFFs and other fluorochemical products in training.

In December 2018, all firefighting foam exposure lawsuits filed in federal courts nationwide were c consolidated in the U.S. District Court for the District of South Carolina for pretrial proceedings.


Another recent lawsuit was filed by a former firefighter in Vermont who says he developed Hodgkin’s lymphoma and testicular cancer from aqueous film-forming foam, or AFFF. James Williams, Jr. claims he used, and was exposed to, AFFFs to fight fires on a regular basis but he was never warned about the health risks, nor was he given protective gear sufficient to guard against exposure.

According to an AboutLawsuits.com article, the use of AFFF at military bases and among firefighters became widespread throughout the U.S. in recent decades, and its increased use may have caused many firefighters to develop cancers and other injuries. Dozens of military firefighting foam lawsuits have been filed since 2015, most of them fired against 3M Company, formerly known as Minnesota Mining and Manufacturing Company. The complains claim that 3M knew or should have known of the hazards associated with perfluorinated compounds (PFCs) exposure within its AFFF, which has been used by the military over the last several decades during routine fire extinguishing exercises at military bases across the nation.


3M published data back in 1980 showing that humans retained PFOS in their bodies for years. The data also indicated that the accumulation of the chemical in the workers’ bodies was related to birth defects in those same workers’ children.

Since the 1960s DuPont has studied the potential toxicity of PFOA and knew the chemicals don’t break down easily and can accumulate over time. But they decided to hide the environmental and health effects from the public. Over the years, Dupont has paid millions of dollars in lawsuit settlements related to its products containing these chemicals.

More than 40 years ago, research found that PFOA caused testicular cancer in animals and workers exposed to these chemicals had an elevated incidence of certain cancers and other adverse health effects. Yet the U.S. Environmental Protection Agency waited until 2010 to “ask” companies like 3M and Dupont to stop manufacturing and/or using certain PFAS or use alternative, safer PFAS, known as “short-chain PFAS”. But recent studies indicate that even these types of PFAS can persist in human blood and can cause tumors in animal studies.