Efforts to consolidate Monsanto Roundup lawsuits involving the well-known weed killer Roundup by Monsanto Co. (Monsanto) have resulted in centralization in California, a win for plaintiffs who had been pushing for the Golden State over other jurisdictions Monsanto fought centralization, but these efforts failed to sway the Court. 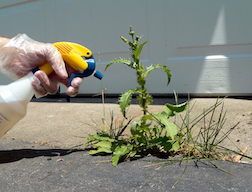 Lawsuits alleging Roundup causes cancer in humans have been filed in 21 separate districts, thus the consolidation within multi-district litigation effectively centralizes the litigation in a single district in Northern California for pre-trial proceedings.

While allegations that weed killer can be toxic to humans has been around for some time, the issue has been flying under the litigation radar in recent years, dwarfed by more compelling issues that have succeeded in attracting the media spotlight – such as exploding automotive airbags and cancers linked to pharmaceuticals.

However, cancers allegedly tied to Monsanto Roundup weed killer are beginning to emerge into a more profound spotlight.

What’s more, the issue is nothing new. A lawsuit filed back in 1996 took Monsanto to task for claiming that Roundup was “practically non-toxic” to fish, mammals and birds along with a claim that Roundup was “safer than table salt.” The Attorney General’s office for the State of New York initiated that lawsuit 20 years ago.

Other Monsanto Roundup lawsuits allege that Monsanto has known about a link between cancer and Roundup’s active ingredient glyphosate since as far back as the 1980’s but failed to warn.

The Shephard lawsuit was filed in federal court in Hawaii earlier this year. Edward Hardeman filed his Monsanto Roundup lawsuit this past February in California’s Northern District.

More MONSANTO ROUNDUP News
Not only did Monsanto attempt to block centralization of the claims, it also attempted to have the claims dismissed. In the Hardeman case, the defendant attempted to assert the claim was preempted by the Federal Insecticide, Fungicide and Rodenticide Act.

Monsanto vice president of global strategy Scott Partridge said in a statement that the consolidation of cases “simply streamlines the process of pre-trial discovery and some evidentiary decisions but in the end the cases will be tried individually in the federal jurisdictions in which they were filed,” Partridge said. “These cases will fail on the merits because the very long and well-established history of glyphosate proves it is safe.”

The case is In Re: Roundup Products Liability Litigation, MDL number 2741, in the Judicial Panel on Multidistrict Litigation.

Posted by
David Williams
on February 12, 2017
I am a quadriplegia disabled military veteran suffer from prostate cancer. I had surgery to remove adenocarcinomia cancer which I lost my prostate, severe urinate problems , bowl problems. Required thirty-five days radiation to subdue cancer. I inhaled paraquat dichloride an agent orange substance which spraying the spray around base parameter state side. I do not know whether I qualify.