With aging Baby Boomers continuing to be put on statins to fight the so-called “bad” LDL cholesterol (suspected of causing arterial plaque that leads to heart disease), a growing concern surrounds the potential for diabetes associated with higher-dose statins. The potential for Lipitor diabetes is among those concerns. 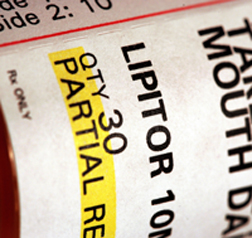 To that end, a new study by Canadian researchers suggests the diabetes risk amongst higher-potency statins such as Lipitor remains higher than lower-potency statins. Lipitor has been described as the most popular statin, used by patients to control their Lipitor mdl levels.

According to the Edmonton Journal (5/25/13), Dr. Muhammad Mamdani and colleagues were dissatisfied with previous studies that afforded conflicting results. Thus, Mamdani et al scrutinized the records of more than 470,000 individuals age 66 and above who resided in the province of Ontario and without symptoms of diabetes prior to starting on a statin.

Lipitor was one of three statins found to increase the risk of developing type 2 diabetes. Mamdani and colleagues estimated that for every 1,000 patients taking a higher-potency statin such as Lipitor, six to 10 patients will emerge as symptomatic of type 2 diabetes. Mamdani identified the risk as relatively small. “But there are a lot of people taking these high-potency statins. In fact, atorvastatin is by far - by far - the most popular statin.”

Margaret Clark knows all about that risk and the potential to see that risk realized. The South Carolina plaintiff filed a Lipitor diabetes lawsuit March 25 in US District Court for South Carolina, Charleston Division, Case No. 2:13-cv-00796, alleging that Lipitor manufacturer Pfizer failed to adequately warn physicians and consumers about the potential for diabetes associated with Lipitor. Clark was diagnosed with atorvastatin type 2 diabetes.

Clark, it was reported, was put on Lipitor in 1999 to combat high levels of LDL cholesterol and took it for 10 years before developing atorvastatin type 2 diabetes in 2009, in spite of a healthy lifestyle and a body mass index (BMI) of 24.8. Health Canada, the Canadian counterpart to the US Food and Drug Administration (FDA), mandated a label change to Lipitor and other high-potency statin drugs to reflect a small, increased risk for diabetes.

More LIPITOR DIABETES News
Mamdani, director of the applied health research center at the Li Ka Shing Knowledge Institute at St. Michael's Hospital in Toronto, maintains that doctors and their patients have to individually weigh the risks between the possible onset of diabetes, against potential heart risk tied to Lipitor mdl cholesterol levels that remain unchecked.

The Women’s Health Initiative (WHI) statin study, published in January of last year, concluded that statin medications such as Lipitor mdl used by postmenopausal women were associated with an increased risk for diabetes mellitus (DM). “This may be a medication class effect. Further study by statin type and dose may reveal varying risk levels for new-onset DM in this population,” the researchers wrote.

Mamdani’s more recent study appeared in the prestigious BMJ, the Journal of the British Medical Association.

Posted by
Michael
on August 6, 2013
I started Lipitor 40 mg. about 7 years ago after double bypass and aortic valve replacement. I had taken Lipitor much earlier but quit because of muscular aches and weakness. My doctor recommended I take COQ10 with the Lipitor to alleviate the reactions and it works. I now take Atorvastatin 40 mg. Over the last couple of years I've developed uncomfortable itching and tingling in the bottoms of my feet. There is some numbness in the fingers and thumb of my right hand from the first joint to the end. I have discoloration on top of my left hand which appears like a permanent bruise. I wake up to urinate 3 or 4 times per night. I am thirsty every time I awake. I am very active, run 12+ miles per week, have never been overweight, I weigh 173 lbs. at 5'11" tall. I have been a runner for 50+ years (I am 66 years old). I have a history of high cholesterol with total readings exceeding 260 ml/L untreated.
Posted by
Wkenddad
on August 6, 2013
Neither of these studies is a cause and affect study.
They simply looked at people taking Lipitor, Zocor and Crestor and compared the emergence of new onset diabetes. Nothing is said that those people that require these medications to control their LDL cholesterol are probably genetically predisposed to Diabetes. That is why there is a larger percentage of new onset DM. These people would have become Diabetic in time with or witout the use of these Statin medications. Truth is these patients were able to become diabetic because these Statins helped prevent them from having major heart attacks or stokes that would have prevented them from becoming diabetic due to an early death.
Posted by
dan
on July 27, 2013
I've been taking Lipitor for over 20 years and last year my toes started feeling numb. It was like they were asleep all the time, or like I was walking on Brillo pads. A neurologist diagnosed it as neuropathy ,but I tested negative for diabetes . Now I'm starting to wonder . Has anyone else had this problem ?
Posted by
freda
on June 30, 2013
I have been taking lipitor 40mg for quite some time now before I had to use victosa.I was slim at 48yrs old all of a sudden my weight started to creep up 1kg every day until I went from 60kilo's to 89kilos rapidly.Then I was diagnosed with insulin resistance, had to start taking tablets to help with the sugar problem when my dose got to be 1500mg a day it was making me vomit so was switched to victosa,I wonder if lipitor played any role in me now having to take victosa.have lost 15 kilo's now so getting weight under control again.Take Lipitor still.