Hoping to protect college students from excessive overdraft fees and other banking practices that would push them further into debt, federal regulators have finalized regulations that should help them keep better control of their money. The rules affect students who have bank accounts with financial institutions that have ties to educational institutions. 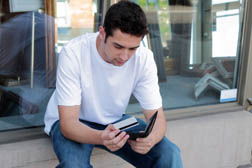 According to a news release from the Department of Education (10/27/15), the new regulations will help students who have college debit or prepaid cards. The Department of Education, citing information from the Government Accountability Office and the U.S. Public Interest Research Group, notes that institutions enrolling around nine million students have agreements with financial institutions offering debit or prepaid cards, with almost $25 million in Pell Grant and Direct Loan funds released to such accounts.

More CREDIT UNION EXCECESSIVE OVERDRAFT FEES News
In its news release, the Department of Education noted that a report from the Department Inspector General found evidence that some students incur unreasonably high fees as a result of using preferred accounts that they have been persuaded to use by third-party service providers, resulting in a loss of federal student aid funds. The same report noted that the total fees students pay on college debit or prepaid cards is not known, and some providers “declined or said they were unable to provide these data to GAO.”