Santander Bank reportedly faces $10 million in fines after the Consumer Financial Protection Bureau found the company misled customers about its overdraft protection program. Banks and credit unions have faced increasing scrutiny in recent years over excessive overdraft fees and other unethical practices, and consumers have fought back, in some cases filing lawsuits against financial institutions for egregious activities. 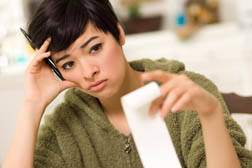 According to the Consumer Financial Protection Bureau Santander Bank used aggressive tactics with its call campaigns to encourage customers to opt into its overdraft protection plan.

Customer service representatives operating on Santander's behalf were accused of not following the script provided by the financial institution and signing customers up for overdraft even when they had not authorized the change. Despite receiving complaints about their customer service representatives, Santander continued to use the same telemarketing vendor to increase overdraft opt-in.

On one call included in the CFPB's court documents, the representative responds to a question about costs associated with the program by saying, "There is no monthly or annual fee and even after you do over, um, overdraw your account, and then there's - that's the only time there's a fee of $35 and even if it takes you a while to pay it up, it's only that $35 that you'll ever have to pay. There's no other fees after that."

In fact, the CFPB argues, consumers are charged $35 per overdraft transaction, plus a one-time $35 fee if the account was still overdrawn six days later.

Changes to banking rules in 2010 made it illegal for banks to charge overdraft fees on ATM and one-time debit card transactions unless consumers opted-in for the service.

Santander was ordered by the CFPB to pay $10 million in fines. The financial firm will also have to validate all opt-ins that were approved through the vendor, not use a vender to telemarket overdraft programs, and increase its oversight of all third-party telemarketers.

Posted by
Pearlie Murray
on August 23, 2016
I was penalized with accessiive fees as an account holder. $35 for overdraft, additional $35 if account was overdrawn too long and $5 a day for each day it was overdrawn. Also, I was charged fees for using another company ATM's. Santander only had one ATM's in a location that was several miles away from the branch in my neighborhood. Neighbor branch was not available after hours so you were forced to use other localized ATM's. Only After customers complained Santander placed one in the neighborhood CVS Pharmacy on Greewood Ave. in Trenton, Nj. I joined overdraft protection with Santander to offset NSF charges. Santander begin charging for joining on a monthly basis. This occurred for many years. Subsequently, Santander was charging me a maintenance fee on all my accounts.