When debt collection agencies break the law, they sometimes do it in horrifying fashion, leaving those people they have come in contact with scared and unsure of what to do. Laws such as the Fair Debt Collection Practices Act are designed to protect consumers from unethical, aggressive or threatening tactics from debt collectors, but often consumers do not know what steps they can take - including filing a lawsuit - to protect themselves. 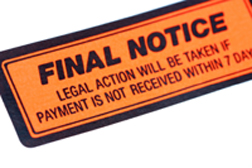 According to a news release from the Federal Trade Commission regarding a years’ worth of investigations into unethical debt collections practices, debt collectors were accused of using deceptive or abusive tactics to intimidate consumers, and either collecting on non-existent debts or on debts not owed to those collectors.

More DEBT COLLECTOR News
Among the threatening or deceptive tactics were threatening bodily harm to the consumers, desecration of family members who had died and death to pets. Other tactics included threatening to garnish wages, masking identities, threatening imprisonment, charging unauthorized late fees and charging inflated fees. In the so-called “phantom debt” cases, collectors were accused of defrauding consumers, collecting money that was not actually owed, collecting that was not applied to the consumers’ debts and collecting on debt that was so old it was no longer legally collectable.

In January, the Federal Trade Commission announced that at the Commission’s request a district court shut down a debt collection agency that had told a woman she would go to jail for three years and forfeit her disability payments if she did not pay $980 in debt. In other cases, the debt collector allegedly told consumers their children would be put in government custody and claimed they worked with local sheriff's offices.

Other offences allegedly committed by the collection agency included using obscene language and calling outside the allowed hours.

Consumers can file complaints about unethical or threatening debt collections practices. They can also file a lawsuit against the debt collection agency.

If you or a loved one have suffered losses in this case, please click the link below and your complaint will be sent to a financial lawyer who may evaluate your DEBT COLLECTOR claim at no cost or obligation.
Request Legal Help Now

Posted by
Alanna Lane
on May 12, 2013
Debt collectors placing debts on credit report after a letter has been sent to me stating legal they are not suppose to place on credit report but can still call you.

Debt collectors calling to collect on a debt placed in bankruptcy and was discharged years ago.

Paid off student loan off 2 years ago 2011, 2013 they still haven't updated the NSLDS showing I am still defaulted in a student loan.