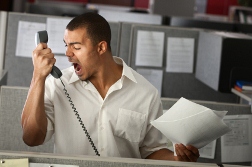 The proposed regulations were announced by Superintendent of Financial Services Benjamin M. Lawsky in a news release (7/25/13; found online at dfs.ny.gov). The reforms are aimed at preventing harassing phone calls from debt collectors, stopping agencies from collecting “zombie debts” - meaning debts that have already expired - and addressing issues such as companies collecting debts from the wrong consumer or for the wrong amount of money.

The Department of Financial Services noted that among the most common financial complaints filed by consumers both nationally and in New York are complaints about debt collector harassment, including repeated phone calls and attempting to collect on a debt from the wrong person. In the last year and a half, more than 13,000 complaints were reportedly filed against debt collectors in New York alone.

More BILL COLLECTOR News
Among the regulations proposed are rules that would force a debt collector to verify that a debt is actually owed if the consumer disputes it. That verification would require documentation of a valid debt, including the signed contract. Consumers would be given the right to request all communication occur via e-mail to reduce the number of phone calls and allow for a record of interactions. The proposed regulations would also require collectors to inform consumers when they are attempting to collect on a debt after the statute of limitations has expired on that debt, and let consumers know that the expiry could be used as a defense in a collection lawsuit.

Finally, the regulations would require more transparency when debt collectors begin the collection process against a consumer, including a breakdown of charges and fees related to a debt.

“Debt collectors frequently use abusive scare tactics to try to stack the deck against struggling families and squeeze outsized profits out of their financial misery,” Lawsky said. “These reforms will help level the playing field for consumers so they have a fighting chance as they work hard to put their financial life back in order.”