Lest anyone make a consumer feel like a second-class citizen for having debt, remember that well-managed debt makes the world go round and the term “debtor” is nothing to be ashamed of. And even in the face of unavoidable circumstances, were a consumer to miss a payment or two, there are certain rules a debt collector must follow in order to pursue that debt within the letter of the law, in order to avoid harassment and unfair practices. Otherwise, a debt collector lawsuit is justified. 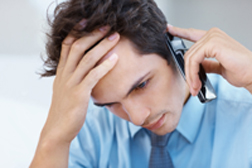 Under FDCPA guidelines - in order to avoid debt collector harassment - a debt collector is prohibited from engaging in any conduct, “the natural consequence of which is to harass, oppress or abuse any person in connection with the collection of debt,” to “use any false, deceptive or misleading representation or means in connection with the collection of any debt,” or to “use any unfair or unconscionable means to collect or attempt to collect any debt.”

The FDCPA usually applies to third-party debt collectors and collection agencies - and here is where the trouble usually starts. The primary holder of debt already has a relationship with the debtor, complete with up-to-date information. More often than not, however, consumer debt is sold off to third parties - delinquent debt, especially. In the absence of a pre-existing relationship, these third-party collectors will often stoop to bill collector harassment that can be further exacerbated by incorrect information watered down with each passing of the account to a new bill collector.

Consumers are sometimes hounded for debts they no longer owe, due to incorrect information. This is fodder for debt collector harassment, and a bill collector lawsuit often follows.

How does the FDCPA relate to real estate? Primarily through third-party relationships. Last month the Consumer Financial Protection Bureau issued a consent order against NewDay Financial LLC, a mortgage lender offering mortgage loans guaranteed by the Veterans Benefits Administration (In re NewDay Financial Inc., 2015-CFPB-0004 (Feb. 10, 2015)). The order is based on an allegedly deceptive advertising relationship with an unidentified third-party veterans’ organization.

As for debt collector harassment, here are the facts: yes, a consumer may owe a debt - but there are specific rules of conduct a debt collector is mandated to follow. For example, a bill collector may call a debtor at his or her place of employment with the following conditions. He can identify himself in name only (not organization) and ask to speak to the debtor directly. He is not allowed to disclose to anyone other than the debtor that he is calling from a collection agency, or that a debt is even owed, or the extent of its delinquency. He can’t ask someone’s boss to withhold money from a paycheck - and generally he can’t be a pest at the place of employment.

If a consumer who holds an outstanding debt has had enough, a request can be made to stop the calls - and the bill collector has to comply or risk breaking the law.

More BILL COLLECTOR News
Another aspect of bill collecting that many consumers don’t know is that debt collectors are not allowed to threaten a lawsuit, or threaten to confiscate or seize property. Unless there is wording in a contract that allows them to do so, a bill collector can’t threaten or actually undertake the seizure of property without a court order. So he can’t come and take the blender a consumer still owes payments on…

The Fair Debt Collection Practices Act has been around for some time. However, administrators are attempting to put sharper teeth into the Act in an attempt to better protect consumers. Be that as it may, with debt collectors and collection agencies continuing to horse-trade accounts for pennies on the dollar and thereby attempting to collect on debt with inaccurate or insufficient information - together with the utilization of tactics not in keeping with the tenets of the FDCPA - consumers continuing to feel the sting of debt collector harassment are turning to the courts. Many a bill collector lawsuit has seen favorable results for the plaintiff, and much-deserved justice for the harassed consumer.