Debt Collector Harassment: An Envelope Is a Window of Opportunity

It may seem like a trivial thing at first glance, but placing a debtor’s account number in full view either on or through an envelope may constitute debt collector harassment, and most certainly serves as a violation of the Fair Debt Collection Practices Act (FDCPA), according to a recent appellate decision that overturned a lower court ruling. 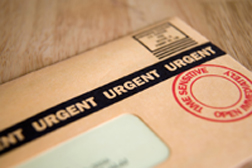 Douglass viewed that as bill collector harassment in that it was, in her view, a violation of her privacy and a circumvention of the spirit of FDCPA as it relates to privacy.

Many a debt collector lawsuit has taken collection agents to task for not only harassment, but also alleged violations of privacy. FDCPA clearly states that envelopes containing collection notices cannot identify, in any way, the recipient as a debtor. Nor can bill collectors use envelopes to highlight other provocative or threatening language or images that could be interpreted as a violation of the recipient’s privacy, or FDCPA statutes.

A lower court ruling in Douglass’ bill collector lawsuit filed in 2012 found in favor of Convergent. The District Court of Montgomery County, Pennsylvania held that Section 1692(f)8 of the FDCPA provisional guidelines was meant by Congress to prevent the blatant use of any “language or symbol” suggesting an owed debt other than the basic information pertaining to recipient name and address.

The lower court ruled that an account number showing through an opaque window fell outside the provision and into a so-called “benign language” exception.

More BILL COLLECTOR News
However the Third Circuit, on appeal from Ms. Douglass, disagreed with the lower court ruling in the debt collection lawsuit - and also took exception to Convergent’s position that an account number is just a “meaningless string of numbers and letters,” according to court documents.

“[T]he account number is not meaningless - it is a piece of information capable of identifying Douglass as a debtor,” the opinion, penned by Circuit Judge Anthony Scirica, stated. “And its disclosure has the potential to cause harm to a consumer that the FDCPA was enacted to address.” Scirica was part of a three-judge panel ruling on the case.

The debt collector lawsuit is Douglass v. Convergent Outsourcing, Case No 13-3588, in the US Court of Appeals for the Third Circuit.

Posted by
Levius Toussaint
on September 4, 2014
I was harassing by several different collection agencies 24 hours non-stop even I filed for Bk chapter 7 they always told me they don't care about the harassmenet.