Veterans Issued 3M defective earplugs say their hearing is getting worse, ringing is “torture” and they threw army-issued 3M earplugs in the garbage.

Brian is a former Marine Corps combatant diagnosed with hearing loss and tinnitus. “I served three tours in Iraq and many training missions where I was a forward observer of artillery, heavy guns, and aircraft ordnance. These 3M earplugs were my standard issue and we were also given no instruction on use or efficacy,” says Brian. “I was unaware that this hearing protection was defective until I read about 3M defective earplug lawsuits online.” 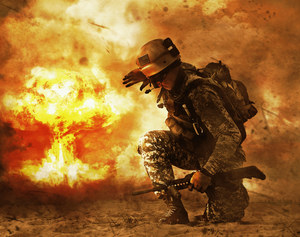 “It sucks when I have to say ‘What?’ to my kids just three feet away from me,” says Michael, age 34, from Louisiana. “If they are facing the other way I can’t hear them at all.” Michael was in the infantry for more than a decade: between 2004 and 2014 he was deployed twice to Iraq and once to Afghanistan. He isn’t sure when exactly the ringing in his ears started, but he saw a specialist in 2015 who prescribed hearing aids, and hearing loss is part of his VA compensation.

“I turned 19-years-old on a machine gun range during basic training when we wore little orange earplugs, which worked much better than that 3M junk,” says Michael. “ I was never shown how to wear those dual-ended earplugs or which side went out so I put the yellow side in. The only thing they told us when we were issued them was that one side was supposed to let you hear more and the other side was to block out more sound. But we didn’t know which one was which and they were all the same size. And we were told that if we didn’t wear the 3M earplugs we would be in trouble, but I was done with that,” Michael adds.

“I went to an ENT [ear, nose and throat specialist] and he gave us the old school earplugs that fit the canal properly. Constantly going back to see him got to be a pain in the ass so I started to buy my own Surefire Sonic earplugs online and at the military clothing stores.” Unfortunately Michael didn’t use this brand until this third deployment so the damage had been done.

Even with a hearing aid, Michael wakes up with ears ringing and goes to bed with ears ringing. “I can’t be in dead silence, it hurts too much,” he says. “My hearing aid adds ambient noise so it helps in a quiet room but overall the ringing is still there.”

“When I learned that 3M knew their earplugs were defective but didn’t tell the army I figured it was just another large company trying to f*@k over a soldier. We have a saying that’s called “Being f*@ked by the big green weenie”. We know that most our equipment is built by the cheapest contractor and 3M is no different. Lots of us soldiers even order gear made by different companies when we realize issued equipment is garbage—I guarantee any U.S. vet will say this. Talk to any soldier and they will tell you that they wore these 3M earplugs for a few months and then tossed them in the garbage. I started wearing SureFire earplugs and a Peltor headset on top. And we don’t get reimbursed for the gear we buy.”

Todd, from Brownsville, Texas, served in the U.S. Army as Indirect Fire Infantryman and member of a mortar squad during the invasion of Iraq. A “mortar man” performs some of the most dangerous jobs: they are required to fire and recover anti-personnel and anti-tank mines and more. “I fired thousands of mortars in Iraq from April through October, 2003,” says Todd. “In my job I fired 120mm mortars (the biggest). I also had to fire .50 caliber machine guns and every lower classed machine guns and rifles as well (M240B, m-4, etc.) I used those crappy 3M earplugs when our regular ones deteriorated after a few days.” Todd has suffered progressive hearing loss since 2003.

More 3M DEFECTIVE EARPLUGS News
Last year the Justice Department settled a lawsuit against 3M for $9.1 million, and the manufacturer admitted no liability. But thousands of U.S. veterans are now filing lawsuits against the manufacturer for the hearing problems they’ve suffered after using 3M defective military earplugs. Litigation against 3M was started in late 2018 by a number of law firms representing veterans who used the 3M Combat Arms earplugs and suffered noise-induced hearing loss. Currently, litigation has been centralized in the
Judicial Panel on Multidistrict Litigation and transferred the 3M Combat Arms Earplug Products Liability Litigation, MDL No. 2885, to this Court for pretrial proceedings before Judge M. Casey Rodgers.

Combat Arms Earplugs, Version 2 (CAEv2) were issued by the U.S. Military for each deployed soldier between 2003 and late 2015. The dual-end or reversible earplugs were used during training and on the battlefield to provide ear protection during service. Lawsuits claim that design defects may cause the earplug to imperceptibly loosen in the ear canal, rendering the earplugs useless or less effective.

Posted by
Daniel J dresen
on August 11, 2019
Mine isn't as bad but it is a pain to constantly say what to my kids and wife when we are in the same room. One of the plugs popped out during a life fire range and now I have a dull ringing.