New York medical malpractice claims are made against doctors or other healthcare professionals or organizations whose standard of care fails to meet an acceptable level. When the standard of care falls and a patient suffers harm as a result, a New York medical malpractice lawsuit may be filed against the doctor, health care provider, or institution whose actions caused the harm. Medical Malpractice lawyers typically include claims of medical negligence in hospital malpractice complaints.

Send your New York Med Mal claim to a lawyer who will review your claim at NO COST or obligation.
GET LEGAL HELP NOW 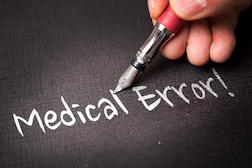 A study from Johns Hopkins and published in the BMJ (2016), states that medical errors are the third-leading cause of death in the US. Patient safety experts analyzed medical death rate data over eight years and calculated that over 250,000 deaths per year in the US are due to medical error.

In New York there is no cap or limit on damages awarded a victim of medical malpractice. But there is a “sliding scale” for attorney fees, which stipulates (as per Jud. Law section 474) a cap on the percentage that an attorney can take as a fee in a successful case.

Certificate of Merit: The Plaintiff’s lawyer must file a written certificate of merit (also known as Affidavit of Merit) within 90 days of filing a New York Medical Malpractice lawsuit. This certificate is meant to deter frivolous claims by requiring that claimants show an opinion from a qualified physician stating that the physician has reviewed the plaintiff’s medical records.

New York CPLR section 3012-a requires the certificate to include one option: Shared Fault Rules: If you go to trial in New York and are found partially liable for your injuries, your damages award will be reduced due to the state’s “Pure Comparative Negligence” rule. For example, you are found partially negligent, say 20 percent at fault, regarding your illness or injury. If you are awarded $200,000 in damages, the amount would be reduced to $160,000.

If you do not file a medical malpractice lawsuit within this time period, you lose your right to sue, but there are a few exceptions:
Currently, legislation before New York state lawmakers could significantly alter the statute of limitations. The bill would amend the SOL so that the clock starts when a patient first realizes they were possibly misdiagnosed or harmed by a medical professional — as long as the lawsuit is filed within 10 years of the original incident.

According to the Associated Press (June 2016), Elissa McMahon was told by doctors in 2012 that she had benign uterine fibroids. By 2014 she had advanced uterine cancer that had spread to her liver and spine. She said her new doctors told her the disease should have been caught in 2012 but since it had been almost three years it was too late to file a malpractice suit. McMahon is a leading supporter of the effort to pass the bill.

In 2013 a cerebral palsy victim received a $130 million judgment after her lawyer, Thomas Moore, refused to settle for $8 million. Moore successfully told a Long Island jury that St. Charles Hospital in Port Jefferson was responsible for mistakes made during delivery that left Shannon Reilly, now aged 10, with cerebral palsy.

An infant sustained brain damage caused by vacuum extraction at birth. A $2 million settlement was obtained on behalf of the infant plaintiff, which is the full amount of the insurance policy that was available from the defendant.

The family of a patient killed after an ER doctor failed to diagnose an aneurysm was awarded $3.4 million in their medical malpractice suit.

A young woman developed sepsis and permanent disfigurement as a result of her surgeon’s failure to timely diagnose an infection (necrotizing fasciitis). She settled for $1,300,000 in Supreme Court, New York County.

If you or a loved one has suffered similar damages or injuries, please fill in our form and your complaint will be sent to a lawyer who may evaluate your claim at no cost or obligation.
Please click here for a free evaluation of your New York Med Mal claim
Last updated on Apr-27-20