Were you looking for Medical Malpractice lawsuits?

New Mexico medical malpractice claims may be brought against any healthcare professional or organization if the standard of care fails to meet an acceptable level. When a patient suffers harm as a result of such failure, a New Mexico medical malpractice lawsuit may be filed against health care providers, including doctors, counselors, and psychotherapists, or institutions whose actions caused the harm. Medical Malpractice lawyers typically include claims of medical negligence in hospital malpractice complaints.

Send your NM Medical Malpractice claim to a lawyer who will review your claim at NO COST or obligation.
GET LEGAL HELP NOW

New Mexico Medical Malpractice lawsuits can be filed for a number of reasons, including: 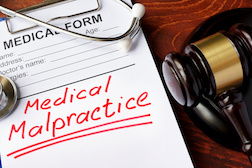 Doctors at Johns Hopkins suggest that medical errors are the third leading cause of death in the US, right behind heart disease and cancer. After analyzing studies examining death rate information, they estimate at least 251,454 deaths due to medical errors annually in the US, not including medical errors in private homes and nursing homes. In 2008 the U.S. Department of Health and Human Services Office of the inspector general reported 180,000 deaths by medical error among Medicare patients alone. But less than 20 percent of victims injured by medical malpractice in the US pursue claims for their injuries.

Economic damages include compensation for medical expenses, lost income, and other financial losses. Economic damages are not limited to a specific dollar amount, but New Mexico does limit the payment of future medical bills to amounts actually incurred. This means that, should an injured person need continual medical care, they can only receive damages for bills received rather than an amount based on future estimates of care.

New Mexico does not have an affidavit or certificate of merit requirement (a sworn statement from an expert witness that must accompany the initial medical malpractice complaint in some states). It does, however, require the use of medical expert testimony in nearly all medical malpractice cases.

A New Mexico medical malpractice lawsuit must be filed no later than three years from the date of an incident causing injury. In cases against state, county and local government, the statute of limitations is only 2 years. The shorter period applies under New Mexico‘s Tort Claims Act. For children who were under age six when the injury occurs, the time limit expires on the child’s ninth birthday. Applying the statute of limitations can be difficult as some cases factor the date when the injury becomes apparent, not necessarily the date it occurred.

For example if an injury occurs during surgery (an instrument is left in a surgical cavity, for example) but the patient doesn’t experience any discomfort or pain until three years after that surgery, the statute of limitations begins from the date any symptoms are first noticed.

In 2014 New Mexico court affirmed a $7.3 million medical malpractice verdict for MRSA infection following knee surgery. Besides suffering the infection, Lori Sandretto presented expert testimony that she might not have needed the knee replacement nor developed the chronic pain condition had her doctor handled the case differently.

Also in 2014, a heart patient who alleged he was implanted with an unnecessary pacemaker was awarded $67.3 million.

In 2015 An Albuquerque jury found a doctor and an intensive care unit nurse guilty of negligence over the death of a mother from high blood pressure during the birth of her third child. The award totaled $3 million.

If you or a loved one has suffered similar damages or injuries, please click the link below and your complaint will be sent to a lawyer who may evaluate your claim at no cost or obligation.
Please click here for a free evaluation of your NM Medical Malpractice claim
Last updated on Apr-27-20