Lawyers are investigating a potential lawsuit against Gaiam, alleging the company marketed Gaiam water bottles as not containing Bisphenol A (BPA) when in fact, Gaiam bottles did contain BPA. According to the website Z Recommends, Gaiam has reportedly admitted that an independent lab test showed BPA leaching levels as 23.8 parts per billion from Gaiam bottles.

Send your Gaiam Water Bottles claim to a lawyer who will review your claim at NO COST or obligation.
GET LEGAL HELP NOW

The Gaiam water bottles at issue are reusable aluminum bottles. They were marketed as not containing BPA, however, reports indicate that the Gaiam bottles do, indeed, contain BPA.

The Gaiam situation is similar to another controversy, this one involving SIGG water bottles. SIGG faces a lawsuit alleging the company promoted its water bottles as being free from BPA when it knew they were not. In fact, according to the Organic Consumers Association (OCA, September 23, 2009), SIGG forced the association to retract a statement recommending consumers avoid the SIGG bottles because of BPA. The OCA reportedly printed a retraction and issued a letter of apology to SIGG, who used the OCA's quotes in its own letter, legitimizing its claim that its water bottles were BPA-free. However, according to the OCA, SIGG knew the whole time that SIGG bottles contained BPA. 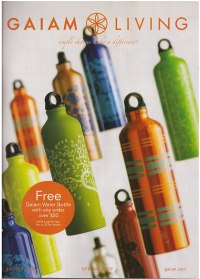 Gaiam is not accused of taking the same action toward environmentally-friendly organizations that SIGG reportedly took, but it is accused of falsely marketing Gaiam bottles as BPA free when it knew they were not.

Companies marketing products as environmentally friendly when they are not is known as greenwashing, a combination of green (as in, environmentally sound) and whitewashing. Essentially, greenwashing is the deceptive use of green marketing to sell a product that is not as green as the company says it is. Often, the goal of greenwashing is either to increase profit or to convince customers to purchase a specific product over other products that are not "green".

Advertising a product as not having BPA when it actually does is a form of greenwashing because customers who are environmentally conscious or health conscious would likely choose to purchase a BPA-free water bottle over one that contains BPA.

BPA stands for bisphenol A, a compound used to make plastics. When ingested, BPA mimics estrogen and can affect infants and children. Specific health concerns include brain development and behavior in infants and children. In the past few years, many consumers have started to avoid using products that contain BPA.

If you or a loved one has suffered damages in this case, please click the link below and your complaint will be sent to a lawyer who may evaluate your claim at no cost or obligation.
Please click here for a free evaluation of your Gaiam Water Bottles claim
Last updated on Nov-10-09

A new study will be of interest to couples trying to have children—and could prove insightful to any hopeful parents having trouble conceiving. Doctors with Kaiser Permanente have published findings in Fertility and Sterility that suggest men with elevated levels of bisphenol A (BPA) were two to four times more likely to experience problems with the quality and the quantity of their sperm.READ MORE
Gaiam Water Bottles: Who Can Consumers Trust Now?

Now that you know that SIGG water bottles and Gaiam water bottles leach Bisphenol-A (BPA), you may be wondering if there is any water bottle you can trust.READ MORE
Texas company to make alternative to Gaiam BPA Bottles and others

PlasticPure has reportedly received $1.1 million in federal money to further its research in providing an alternative to potentially toxic water bottles, such as the ones made by Gaiam that allegedly had traces of BPA.READ MORE