Were you looking for VW Recall or VW Canada Recall or Volkswagen Dealership Lawsuit lawsuits?

Owners of certain Audi cars have filed a lawsuit against Audi in the wake of the Volkswagen recall, alleging they suffered financial harm as a result of Volkswagen and Audi using "defeat devices" in certain diesel vehicles to pass emissions testing. In addition to lawsuits by car owners, Volkswagen, parent company to Audi, could be on the hook for up to $18 billion in fines from the US alone.

Send your Audi Recall claim to a lawyer who will review your claim at NO COST or obligation.
GET LEGAL HELP NOW 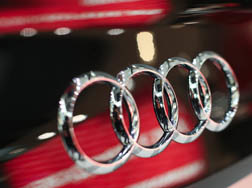 The massive Volkswagen recall, which affected around 500,000 diesel cars in the US and up to 11 million vehicles worldwide, was announced in September 2015, after Volkswagen admitted to using defeat devices to ensure its cars passed emissions testing.

Those devices sensed when the cars were undergoing emissions testing and turned on controls that made it seem the cars' emissions were within regulated limits. Under normal driving conditions, however, the controls were off and vehicles emitted up to 40 times the allowed pollution.

Diesel Audi owners filed a lawsuit against Audi, alleging they bought their vehicles believing that they were environmentally friendly and had good performance ratings. They claim as a result of Audi and Volkswagen's actions, they will suffer financial losses.

If you or a loved one has suffered similar damages or injuries, please click the link below and your complaint will be sent to a lawyer who may evaluate your claim at no cost or obligation.
Please click here for a free evaluation of your Audi Recall claim
Last updated on Oct-22-15

Santa Clara, CA: Volkswagen has agreed to either fix or buy back some 500,000 VW and Audi diesel vehicles in the US equipped with illegal emissions software designed to hide nitrogen oxide emissions. This announcement follows the September 2015 recall of around the same number of vehicles.READ MORE
VW Dealerships File Consumer Fraud Class Action