Arkansas medical malpractice claims are made against doctors or other healthcare professionals or organizations whose standard of care fails to meet an acceptable level. When the standard of care falls and a patient suffers harm as a result, an Arkansas medical malpractice lawsuit may be filed against the doctor, health care provider, or institution whose actions caused the harm. Medical Malpractice lawyers typically include claims of medical negligence in hospital malpractice complaints.

Send your Arkansas Med Mal claim to a lawyer who will review your claim at NO COST or obligation.
GET LEGAL HELP NOW 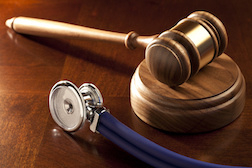 In Arkansas there is neither a cap on patient recovery amounts nor a cap on attorney or legal counsel fee recovery amounts in medical malpractice cases. The only caps on damage awards under Arkansas Annotated Statutes Section 16-55-205 to 209 are those involving punitive damages limited to less than one million dollars in a single claims case, and in turn, ensuring at no point do the punitive damage awards exceed the traditional treble damages standard, or result in payouts three times those the amount of the economic damages presented in a given claims case.

However, in cases of damage awards that exceed $100,000, and at the judge’s discretion, the terms of any verdict can include the provision for period payments over time.

Expert Testimony Under Arkansas laws, a “certificate of merit” is not required to be filed by a victim of medical malpractice or their attorney. In the 2007 case of Summerville v. Thrower medical expert testimony required to file a medical malpractice suit “may have been abolished” at state level. But a case with such testimony is typically a case that involves substantial damages caused by malpractice and readily understood by a jury. Expert testimony is required when the claimed negligence is not within the jury’s common knowledge. ( Prater v. St. Paul Insurance Company, , 1987)

Multiple Defendants The “Joint and several liability doctrine” applies in Arkansas, meaning that multiple defendants are liable for the entirety of the plaintiff’s loss, regardless of each defendants’ degree of fault. For example, if a defendant is only 10 percent at fault, they could be required to pay all the plaintiff’s damages if other defendants are insolvent.

There are caveats under the Medical Practices Act and Regulations, revised March 2017. For claims that involve a foreign object remaining in the body cavity of a patient (such as surgical sponges, instruments after surgery), patients have one year from the date of reasonable discovery of the foreign object.

For cases involving an adolescent patient under the age of nine, a lawsuit can be filed up until the child’s eleventh birthday or in instances of delayed discovery, two years following the date of discovery of harm or once the minor turns the age of nineteen, at which point a claimant will likely be barred from recovery under Arkansas medical tort law.

Here is the basic laws for Arkansas Medical Malpractice Statute of Limitations.

In March 2017 a jury awarded $46.5 million in damages to Karl and Candice Smalls. They filed a medical malpractice suit against family doctor Dr. Jonathan Lewis and Ouachita County Medical Center, claiming that medical negligence and failure to properly manage and treat jaundice in their newborn baby led to the development of kernicterus in her brain. The untreated jaundice led permanent disability and irreversible brain damage.

The suit alleged that Dr. Lewis failed to follow up properly on a blood test that indicated a high risk of extreme jaundice, a life threatening and brain damaging condition that is treatable, even knowing the mother had a previous child with a similar condition. According to the Arkansas Times, the 11 of the 12 jurors signed the verdicts that Lewis was negligent and all jurors agreed the medical center had been negligent, with 85 percent of the liability placed on Dr. Lewis and his employer, a clinic owned by Baptist Health, and 15 percent on the medical center.

A jury in August 2015 awarded Angela Thornton $1.75 million in a case against Dr. Shabir Dharamsey, alleging that he implanted an internal cardiac defibrillator in her when the device was not needed. Thornton’s attorneys said she did not have any heart ailment at the time the device was implanted in November 2010. She complained of chest pain in February 2010 and was seen by Dharamsey, who determined she had a weak heart.

If you or a loved one has suffered similar damages or injuries, please fill in our form and your complaint will be sent to a lawyer who may evaluate your claim at no cost or obligation.
Please click here for a free evaluation of your Arkansas Med Mal claim
Last updated on Aug-28-20

Posted by
Savanna harness
on June 10, 2018
St.vincent cut me off all my anxiety meds, add, anti depressants everything n I had a ceaser for 3 days straight !!! I was told I’d be there another 2 weeks ! After I told the doctor I’m going to die in here I had to go lay back in my bed n he said sudden change of plans... n they threw me clothes n put me in a wheelchair fast !!! The same day ! I waited for my Gma to get me for 3 hours to finally show up my neck was so tight m I had could not move my jaw n arms were locked up I know by law xanex you slowly tapper off of not cold turkey or anti depressants bc of trauma n death can happen. I never knew I had a right to leave ! It was based on my gmas opinions n the doctor It was hell !!!