Send your Oklahoma Medical Malpractice claim to a lawyer who will review your claim at NO COST or obligation.
GET LEGAL HELP NOW 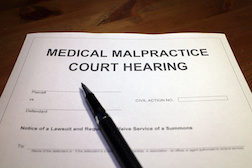 Less than 20 percent of the two hundred thousand victims injured by medical malpractice in the US pursue medical malpractice lawsuits for their injuries. And less than 20 percent of those victims who did file a claim received any compensation for their injuries. Most medical cases that go to trial in Oklahoma (more than 75 percent) end in a defense verdict in favor of the health care provider. But this fact exists because cases in which liability is clear and/or damages are very high typically settle out of court.

Limitation on Damages As of 2009, noneconomic damages--like pain and suffering-- in all medical cases in Oklahoma are capped at $350,000, with certain exceptions for permanent and disabling injuries, wrongful death, or if the court finds “clear and convincing” evidence that the defendant acted with:

Economic damages include your medical expenses and lost wages. Punitive damages are generally limited to $100,000, but in cases of especially malicious conduct by the health care provider, the limit is raised to $500,000.

Expert Testimony Under Oklahoma laws medical malpractice claimants must prove a breach of the standard of care through expert medical testimony, unless the alleged negligence is grossly apparent to a layman. A plaintiff also has the burden to prove causation (that the breach caused injury or death) and damages through expert witness testimony. A medical malpractice plaintiff must include to the initial complaint an affidavit in which the plaintiff (usually through an attorney) swears that a qualified expert has reviewed the plaintiff’s allegations, and the expert believes that a "reasonable interpretation of the facts supports a finding" that the health care provider committed negligence, and that the plaintiff’s case is "meritorious and based on good cause."

Oklahoma does not follow joint and several liability in medical cases. This means that a defendant is only responsible for his proportionate share of damages based on his percentage of fault. A civil plaintiff's damages can also be reduced by their percentage of fault under “contributory negligence.”

Insurance Coverage Most Oklahoma physicians carry a $1 million insurance policy. It is rare for a physician's personal assets to be at risk in a medical case and almost all cases are resolved for amounts within the physician's insurance limits. A physician's insurance company selects the doctor's attorneys, funds the defense of the case, and usually decides whether to settle or go to trial.

A four-year-old girl diagnosed with myocarditis required a pacemaker implant. At age 11, the pacemaker failing to properly function: she suffered permanent and severe brain damage resulting in her death. Her parents filed a wrongful death lawsuit alleging that the doctors had been negligent in their reading of the testing on the pacemaker. A verdict was returned for the plaintiff in the sum of $2,800,000.00.

A man fell from a horse on an outstretched hand and the doctor set his wrist improperly, resulting in skin necrosis. Follow-up care was received from two other doctors, also defendants, who failed to detect the improper wrist alignment. He had permanent injury and loss of use of the arm inhibiting his employment as an auto mechanic. A settlement was reached out of court.

A man went to ER with groin/testicular pain, where he was diagnosed by the doctor with an infection, based only on a clinical exam, no studies were ordered. Plaintiff drove back to his home in Dallas. He went to another hospital where he was diagnosed with testicular torsion and underwent surgery for testicle removal. He filed a medical malpractice lawsuit against the hospital and physician for failing to diagnose the testicular torsion, which caused the loss of his testicle. An all-female jury awarded the plaintiff $58,000.00.

An Oklahoma City neurosurgeon was named in more than 12 lawsuits since 2007 including a wrongful death claim filed in 2009 by the father of a teenage patient who died while under the surgeon's care. Francel reached an agreement in 2010 with Oklahoma medical officials not to practice medicine.

If you or a loved one has suffered similar damages or injuries, please fill in our form and your complaint will be sent to a Medical Malpractice lawyer who may evaluate your claim at no cost or obligation.
Please click here for a free evaluation of your Oklahoma Medical Malpractice claim
Last updated on Aug-27-20