Riding Yamaha Rhino was supposed to be Fun

Riding an ATV such as the Yamaha Rhino is supposed to be a fun activity for many people. Some use it for recreational off-road driving while others use it to do work on their properties. In both cases, the drivers and passengers in the Yamaha Rhino do not expect that it will easily tip over and cause serious injuries.

Yet this is exactly what has happened over and over again. Yamaha has finally made some changes to the Rhino, but these come too late for the people who have been permanently injured by the vehicle.

In extreme cases, passengers have actually been thrown from the vehicle and had it roll on top of them, causing serious injury. In November of this year, a 60-year-old man was thrown from a Yamaha Rhino as it was driven down a hillside. As the vehicle rolled, the man was ejected and the Rhino rolled onto him. 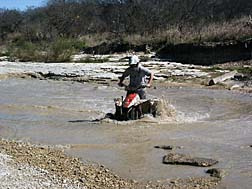 Meanwhile, the family of a nine-year-old boy who was killed in a Yamaha Rhino rollover has filed a wrongful death lawsuit against Yamaha. The boy was ejected from the ATV, despite wearing a safety belt, and was pinned underneath the vehicle. The Rhino was being driven at a slow speed when it flipped. The lawsuit argues that Yamaha knew about the risk of serious injury and death in rollover accidents but has not modified the Rhino's design to make up for the high incidence of rollovers.

According to an article at MSNBC, at least five children have died in Yamaha Rhino accidents and many more have been injured. On Thanksgiving Day a 12-year-old girl was killed when the Yamaha Rhino she was in rolled over and landed on top of her. According to the girl's father, she was driving at a slow speed when the vehicle tipped over.

More News
Despite repeated reports that the drivers of Yamaha Rhinos are not going at fast speeds when their vehicles, tip over, Yamaha maintains on its website that "aggressive driving" or "abrupt maneuvers" have resulted in side rollovers. While this may be true in some cases, many people say that their accidents occurred at very slow speeds, which should not have resulted in a roll over accident.

In August 2007, Yamaha announced that it would install doors and passenger handholds for the Rhino ATV. The doors would prevent Rhino riders from sticking their arms or legs out during rollovers. However, the announcement comes too late for people who were seriously injured in Rhino rollover accidents. Furthermore, doors and handholds will not prevent the Yamaha Rhino from rolling over, which can still cause serious injuries to riders. Yamaha has also not taken responsibility for injuries caused to riders in roll over accidents. Yet.