It is alleged that more than five hundred people perished on ATV's in 2006. Twenty percent of the people that perished in these unfortunate accidents were children. Amid the ATV deaths, 146,600 people visited hospital emergency rooms due to injuries from the well-known Yamaha Rhino ATV within the same year. The information of the alleged incidents was found from information gathered surrounding ATV crashes. The Consumer Products Safety Commission (CPSC) gathered the information regarding the crashes of the alleged defective ATV's.

Accidents involving rollovers with ATV's are hugely common with vehicles of this type. Many people use the vehicles to ride off the road in a more naturalistic setting. ATV's can reach speeds of up to fifty-give miles per hour and some way as much as a quarter ton. Three-quarters of ATV accidents wind up yielding trauma or injuries to the head and spinal chord of its victims. Many people that sustain such injuries sustain life threatening and or lifelong impairments. Paralysis is a common side effect of spinal chord injuries in these types of accidents. 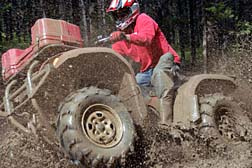 The Yamaha Rhino ATV is alleged to be one of the most hazardous vehicles of its type on the market at the present time. People that view the Yamaha Rhino in a negative light allege that the vehicle has narrow tires and is extremely top heavy making it quite hazardous to drive. These type of defects make it probable that the Yamaha Rhino will tip over while making turns even at lower speeds and while on even ground. Also, the legs of passengers are exposed in a manner that leaves them completely unprotected if a rollover occurs. People involved in rollover incidents on Yamaha Rhinos have allegedly sustained leg, ankle, and feet injuries. Generally, the bones are either completely broken or pulverized in the alleged crashes. Some people come away completely disabled or have had to have arms of legs amputated as a direct result. Usually if children are involved in a rollover crash involving the Yamaha Rhino, it is alleged that it is fatal more times than not.

Pennsylvania has allegedly had the largest amount of ATV deaths in the nation since 1982. This information is part of the CPSC's report. The states next in line with large amounts of ATV deaths are: California, West Virginia, Kentucky, and Texas. All states across America can lay claim to at least on death with ATV's at fault. The CPSC has estimated that in 2005 there were 666 deaths due to ATV's and they believe it is possible that number could be as high as 870 this year. Consumer advocates are working hard to implement policies that would safeguard children by prohibiting the sale of ATV's for the use of children.