As the popular Yamaha Rhino ATVs continue to roll off dealer lots, the allegedly top-heavy 4-wheeler that looks like a golf cart with a roll cage continues to claim lives—some with vast experience with ATVs.

Canadian Rory Stieb, a 26-year-old motor sports enthusiast lost his life earlier this month after the Yamaha Rhino he was driving flipped over and crushed him. Far from a casual, inexperienced user, Stieb was proprietor of Pure Addiction Motor Sports in Edmonton, a small business dedicated to the customization of all-terrain vehicles and snowmobiles. 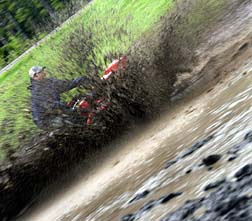 In fact, Stieb had just finished installing a new back end on the Yamaha Rhino, and was taking the unit out for a test drive with a friend, when the accident happened. Even with years of experience around all-terrain vehicles, Stieb was no match for the various Achilles Heels allegedly associated with the Rhino, and after losing control during the test drive, he lost his life when the ATV accused of having a high center of gravity and narrow tires dropped into a ditch and flipped, landing on top of the man. A friend riding with him was not injured.

Critics of the popular side-by-side ATV claim that the vehicle is inclined to rollover and tip far too easily. They claim that the vehicle is too high, and the tires too narrow. Initially featuring half doors as an option, new Rhinos are now shipped with doors designed to at least keep feet and legs inside the vehicle, thereby hoping to prevent the kind of horrid injuries reported up to this point. However, the doors have been known to pop open during a rollover, which defeats the purpose. And as they are half doors with a low profile, they do little to contain arms and hands within the cab.

Meanwhile, people keep getting injured, and children keep losing their lives in the things. One of the latest happened over the Memorial Day weekend in Eastern Kentucky. A 12-year-old girl and a 13-year-old boy were piloting a 2008 Yamaha Rhino ATV near, or along a set of railway tracks when the unit became stuck in the gravel. The two were making a desperate attempt to free the vehicle when it rolled into a nearby creek, and rolled on top of them.

The girl, Sarah Elizabeth Colley, was pronounced dead in hospital.

It's one of the reasons why pediatric surgeons in Canada are calling for a complete ban on the use of ATVs by children younger than 16, based on the rising injury and death toll, and the kinds of injuries they routinely see during the aftermath of an ATV accident.

"As the professionals who must deal with many of the injuries sustained by children and the grief experienced by their families, we are first witnesses to this serious yet preventable problem," the Canadian Association of Pediatric Surgeons said in its statement, published in the Journal of Pediatric Surgery this month. "When recreation becomes lethal or results in permanent disability and heartache for a family, then it can no longer be considered fun."

Not surprisingly, the ATV industry is against a ban, citing the need for parental supervision, formal instruction, and the use of smaller, child-sized vehicles that feature less power than their larger counterparts.

More YAMAHA RHINO ROLLOVER News
However, it should be noted that formal instruction and parental supervision would do little to make up for a vehicle with as many design flaws as the Yamaha Rhino ATV
allegedly has. And the pediatric surgeons association argues that ATVs designed expressly for children are not all that much safer than models geared for adults.

You'll get no argument there from Sue Rabe, co-founder of Concerned Families for ATV Safety, a US-based group comprised of a few hundred families who have lost children to the horrors of ATV mishaps. Some of those deaths occurred with youth-sized vehicles.

Ms. Rabe knows of which she speaks. Her son Kyle was killed on an ATV near the family farm in Oregon in May 2002. The loss, she says, ruined her life.

The Yamaha Rhino ATV, it is alleged, has ruined many more…

If you have suffered injuries in a Yamaha Rhino ATV rollover accident, please send your complaint to lawyer who will review your possible [Yamaha Rhino ATV Accident Lawsuit] at no cost or obligation.
Request Legal Help Now

Posted by
Mark
on September 2, 2011
It's must be a horible thing to loose a child or a love one. I can't amagin losing my son. Saying that, what the heck has happened to self accounability. I will not give a 10 year old child the keys to my car, why would anyone let there under age child ride an atv or rhino or any other dangerous machine without training and supervision? Stupid! I see it all the time, young kids on big utility atv's and no parent around. Yet let the thing flip because of inexperiance and the parents want to take legal action against the manufacturers. Boneheads!
Oh, I'm sorry did I offend anybody? Oh, and I agree with Cody's post.
Posted by
cody
on January 1, 2011
i am an avid atv rider. atvs all have warnings on them everyone. i have never in my 30 years seen an atv or any other machine flip over unless it was rider error. people need to take responsiblty for there own actions. atvs r like guns they wont kill you unless you do somthin stupid with them.