Was Yamaha Shamed Into Finally Fixing the Rhino?

In a telling reversal of previous inaction, Yamaha is finally stepping up to the plate and has suspended all sales of its Yamaha Rhino ATV, until various Rhino ATV repairs and upgrades to models can take place. Various models of the Yamaha ATV are affected. 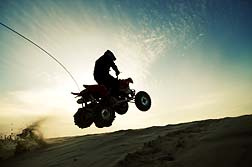 While it's been no secret that the Yamaha Rhino has fostered scores of deaths and injuries over the past number of years, the manufacturer has been reluctant to recall a vehicle that has been generally viewed as unsafe. However, it appears as if consumer advocates have shamed Yamaha into action after the release of a report that contains some pointed recommendations.

Titled 'Citizen Report on UTV Vehicle Hazards,' the document details long-existing problems with the Yamaha Rhino—which serves as the focal point for the report. The Trauma Foundation and the Center for Auto Safety, together with the victims of rollovers and the parents of children killed, all had a hand in the document.

It was forwarded to the National Highway Traffic Safety Administration (NHTSA), the Consumer Product Safety Commission (CPSC), the Recreational Off Highway Vehicle Association (ROHVA) and other organizations, as well as key Congressional leaders in Washington.

Critics of the Yamaha Rhino have long derided the product as being poorly designed and prone to rollover.

But at long last, progress. At the end of March the CPSC, in concert with the manufacturer announced a free repair program to address the safety issues inherent with various models of the Yamaha Rhino family. Existing Rhino 450, 660 and 700 model units will be repaired and upgraded free of charge.

Yamaha has agreed to the installation of a spacer on the rear wheels, together with the removal of the rear anti-sway bar. The latter change is intended to improve vehicle handling and reduce the chance for rollover. Yamaha will also continue a program previously rolled out, where it would install half-doors and additional passenger handholds.

Yamaha, in concert with the CPSC advises that Yamaha Rhino owners stop using the vehicles immediately, until repairs are made. In a dramatic departure from past practice, Yamaha has agreed to stop selling the Yamaha Rhino, until repairs to existing unsold stock, together with changes to manufacturing can be accomplished.

In its release dated March 31st, the CPSC indicated that it had investigated more than 50 incidents involving the three Yamaha Rhino models identified above—including 46 deaths involving drivers and passengers of Rhino 450 and 660 models. Reported injuries number into the hundreds. Who knows how many unreported injuries there are?

Many of the injuries and rollovers reported involve tipping at relatively low speeds and on level terrain, an oft-repeated criticism of the Rhino. Two-thirds of reported incidents involved rollovers and while many of the tragedies involved individuals who were not properly restrained, it is a known fact that seat belts didn't help everybody.

Heidi Crow knows this fact all too well.

Serving as one of the authors and contributors of the blockbuster report, the Texas mother has had to get used to life without her precious nine-year-old son. Even though the boy was wearing a seat belt, the restraint was no match for the lack of accompanying safety features that may have saved the boy's life. When the Rhino rolled over, the young fellow was partially ejected and crushed under the weight of the one-ton vehicle. There were no doors, or safety netting to contain the lad inside.

His story has been repeated time and time again. Others have suffered horrific injuries and have lost limbs.

While the report calls upon manufacturers and regulators to reform and readdress safety issues related to all recreational utility vehicles, the Yamaha Rhino was singled out on a number of fronts. For example, the authors of the report believe that a basis for the large number of fatalities lay with an allegedly-deficient seatbelt system. The report also makes the point that the roll cage should be padded and moved further away from the occupants. Many Rhino occupants have suffered horrific injuries when the un-padded roll cage landed on top of them in a rollover.

Even though Yamaha had responded to the mounting toll of deaths and injuries by offering to retrofit existing Rhinos with half-doors in 2007, critics say that the offer was poorly publicized with only a single mailing to existing Rhino owners. As a result it is estimated that roughly half of the 120,000 Yamaha Rhino units sold in the US between 2004 and 2007 have been upgraded.

The report also asserts that the half-doors are too low and insufficient, incapable of safeguarding an occupant's hands and arms during an accident.

More YAMAHA RHINO News
The report's authors call upon CPSC, ROHVA, Yamaha, and/or all UTV manufacturers to require Yamaha to recall the Rhino to facilitate the addition of full doors and/or netting to protect occupants and asks the CPSC to mandate a recall if Yamaha fails to act. The report calls for the addition of roll bar padding, increasing its axle width, lowering its center of gravity and/or adding a rear differential, to improve stability and handling.

So far, Yamaha appears to have only agreed to add the axel spacer and remove the rear sway bar, together with the addition of half-doors in all units—new and used—and more passenger hand holds. The report calls for much more and its authors will view this as a start, but not a complete fix.

Those who have been injured, or loved ones of those killed in Yamaha Rhino ATV rollovers, will agree that the current round of fixes are not enough. The Yamaha ATV continues to be a vehicle fraught with risk and any user of a Rhino ATV—even after the current round of retrofits are complete—would be wise to proceed with caution.