If a picture is worth a thousand words, then the video of a Yamaha Rhino rolling over onto the driver's left leg makes a dramatic statement. The Yamaha Rhino has come under fire after a number of injuries and deaths have been attributed to the 4-wheel ATV.

Unlike other all-terrain vehicles with either three, or four wheels designed in a motorcycle-like configuration, the Rhino became instantly popular with a car-like design, and side-by-side seating.

However, the product has not been without its critics. Accusations of a high center of gravity and narrow tires suggest the Rhino is prone to tipping, even at slow speeds and flat terrain, according to some. 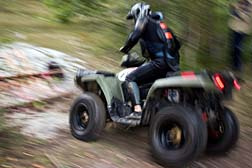 As well, until this year the unit shipped without doors. While there is a full roll cage and seat belts—and Yamaha recommends the use of helmets—there was nothing to contain limbs within the passenger area when a rollover occurs.

Serious injuries to arms, hands, legs and feet have been reported. Some have lost their limbs to amputation when they could not be saved. Others have suffered lost time on the job, lost wages, and other serious economic setbacks from sometimes-horrendous injuries.

Last year, the manufacturer offered to retrofit all Yamaha Rhinos with doors and additional handholds, and doors were to be offered as standard equipment starting with the 2008 model year.

However, it should be noted that, according to photos on the official Yamaha web site, these are not full doors, but rather molded partial doors. While the door appears sufficiently high enough at the front, or hinged end to keep an occupant's leg within the cabin during a rollover, there is nothing preventing an arm from being exposed to the crushing effect of a heavy metal frame, accentuated by speed, coming into contact with human flesh and bone. Even were the molded door to retain the height at the hinged end all the way across to the latch towards the back of the vehicle, there is not sufficient height to keep an arm, or for that matter any part of the torso or head not fully restrained by the seat belt, within the cabin area. As it is, the design of the door is such that it lowers, or reduces in height on the latch side.

The Yamaha web site promotes the addition of doors as a convenience, to ward against the splashing of mud, dirt and water from the trail. It appears, on the accessory sheet, to make no mention of the door as a safety item.

It would appear that the doors would be effective in keeping legs inside.

However, this assumes that the door remains closed.

In the case of the hapless operator of the Yamaha Rhino on You Tube, the door sprung open during the crash.

It is unclear whether the man in the black toque was operating a new 2008 model, or an older model with retrofitted doors. And it should also be noted that the operator was attempting to climb an extremely steep hill, which resulted in the Rhino standing straight up on its two hind wheels for a second or two, before rolling backwards onto its roof/roll cage.

More News
It is here that the door on the drivers' side appears to have become unlatched, as when the Rhino is shown to continue moving, this time rolling from its upside down position to eventually come to rest on its side, drivers side down, the door falls open. With the Rhino still in the air, the driver's leg either falls out of the Rhino towards the ground, or is instinctively pushed out by the driver in an effort to break his fall.

Whatever the reason, with the door open there is nothing to contain the leg within the cabin, which is designed without foot wells. The viewer winces as the Rhino comes crashing down on the unprotected leg.

The driver, it appears, escaped with only a scrape on his head. His leg was fine.

Others have not been so lucky.