Imagine if you were a passenger in a Yamaha Rhino when it rolled over. Through no fault of your own, you were involved in an ATV accident. Now imagine that because you, naturally, stuck your arm or leg out to break your fall, you suddenly faced a decision about whether or not to amputate your injured limb. Now, imagine that people told you that it was your fault that you were injured...that you should never have put out your arm or leg.

That's not to say that everyone feels this way, but there are people out there who say that those injured in Yamaha Rhino accidents were hurt because of their own stupidity. That it's their own fault for using their limbs to break their fall. But that is just not the case. 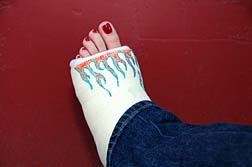 Yamaha Rhino rollovers can happen very quickly and very suddenly. One second you are the passenger in a vehicle that is making a slow turn, the next second, you are being flipped over, with no time to think about what to do.

If you are walking and you trip, the natural instinct is to throw your arms out to break your fall. It happens automatically—with no thought required. There is no time in a Yamaha rollover to think, "Wait, my arms and legs could be crushed by this vehicle, I should not stick them out to break my fall." There simply is no time to do anything but react naturally, which is when people use their limbs to try and break their fall. They are injured because their body has done what it is supposed to do—protect itself from injury. The difference is that when you trip and fall, you have only your own body weight to worry about. In a Yamaha rollover, your limbs can be crushed by the weight of the vehicle.

Regarding why the accident happened in the first place, most people say that they were driving a slow speed and trying to make a turn when it happened. Others say that their Yamaha Rhino ATV rolled over when they were on a slope but not going quickly. Could these people be lying? It's possible. However, testing has shown that it is possible for the Yamaha Rhinos to flip over at slow speeds.

More News
Furthermore, if there were proper safety doors on the Yamaha Rhino, those people who were injured likely would not have suffered such serious injuries to their limbs. Considering that ATVs are supposed to be useful on rough terrains, shouldn't the Yamaha Rhino have been designed to be more stable? And wouldn't it make sense that safety doors or rails could have been installed to protect passengers in the case of a rollover? Surely ATV rollovers were not completely unheard of before the Yamaha Rhino was created.

People who are injured in Yamaha Rhino rollovers usually suffer serious injuries. They often require multiple surgeries, months in hospital and sometimes have to relearn how to use their limbs—all because Yamaha did not design the Rhino with safety doors or rails. And, while Yamaha has now designed doors to be attached to Rhinos, this does not help the people whose accidents happened a few years ago, before the warnings were issued and the safety doors were manufactured. Many of them have scars and injuries that will last their lifetime.