Although many people consider all terrain vehicles (ATVs) fun, they can cause serious injury, and even death, if they are involved in rollover accidents. The Yamaha Rhino ATV has been linked to at least one death and many other injuries and is now facing allegations that it tips over too easily even when it is operated at low speeds.

Earlier this year a nine-year-old boy died when the Yamaha Rhino his 12-year-old sister was driving rolled over. The young boy was pinned under the vehicle, causing serious trauma to his head. The boy was wearing a seatbelt at the time of the accident but a lack of doors on the vehicle allowed him to be partially ejected from the ATV, resulting in his death. 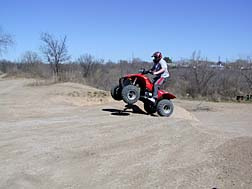 According to a statement by Yahama, "The Rhino, because of its unique design—including a narrow wheelbase, high center of gravity, fast acceleration and extremely quick turning radius—can be very unstable and roll over on either the driver or passenger side when sharply turned at low speeds.... When the Rhino tips or rolls over, the driver's or passenger's leg can come out of the vehicle and be crushed by various portions of the roll bar." Some people who were injured in Yamaha Rhino rollover accidents have required leg amputation, bone grafts, or muscle flap procedures. Even when the leg has been saved, victims are often permanently impaired and deal with severe pain in their injured leg for the rest of their life.

ATVs are often driven by children under the age of 16, even though they do not have proper training in how to drive vehicles. Some groups are now arguing that children under that age of 16 should not be allowed to use ATVs. In an interview with the [Charleston Gazette,] Dr. Denise Dowd, a representative of the American Academy of Pediatrics said that doctors are concerned about AVT accidents. "We know they [children] are going to be really hurt," she said. "The voluntary standards used by the industry are just not working."

More News
Critics of child ATV use also argue that ATV drivers should be licensed just like drivers of cars, noting that children are not mentally or physically able to handle ATVs. Driving ATVs off-road requires the driver to not only steer and maneuver the vehicle, but also to use his or her body weight to control it, especially on extremely uneven ground.

People who have been injured in Yamaha Rhino rollover accidents, or family members who have had loved ones killed by such accidents, are now investigating possible lawsuits against Yamaha. They allege that the Yamaha Rhino was designed with improper protection for the passenger and driver's lower extremities, resulting in serious injury to rider's legs, ankles and feet. They also argue that the Rhino is too prone to tipping over, even at low speeds, because it is top heavy, narrow and has tires that are too small. Finally, they argue that Yamaha's testing of the Rhino's safety was inadequate and failed to show the risk of rolling over at speeds under 20 miles per hour.