Imagine the horror of watching your child ride off in a Yamaha Rhino ATV, expecting that your child will be safe in the vehicle, only to learn that the Yamaha has rolled over and seriously injured your child. Imagine not knowing if your child would be okay, because he or she was pinned underneath the Rhino in the accident.

Next, consider the relief of discovering that your child would survive but then the sadness of realizing that he or she would be hospitalized for months to recover from the injuries—and that your child may not recover at all.

Parents and grandparents have written to LawyersandSettlements to share stories about their children's ordeals. From months in the hospital to repeated surgeries, these children have been through a lot after their Yamaha Rhino rolled over. Some were unable to walk for a long time because of injuries to their legs and feet. Some required months and months of rehabilitation to use their limbs properly again. Some had serious injuries, such as lisfrank breaks (where bones across the top of the foot are broken) and elbows bent backwards. 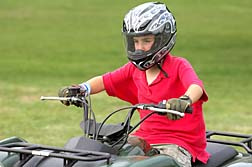 Imagine how painful such injuries would feel as an adult and then try to imagine how they would feel to a child, or how devastating it would be to learn that you may never fully recover from your injuries. Worse, not all children survive Yamaha rollovers. There have been reports of some deaths related to Rhino ATV accidents. Some of those who died were children and some died even though they were wearing their seatbelt.

More News
The maker of the Yamaha Rhino has a duty to make a product free of inherent flaws. The Yamaha Rhino, because of its high center of gravity and narrow frame is allegedly prone to rollover accidents. In cases where an inherent flaw cannot be designed out, the manufacturer must either provide safety mechanisms against such hazards (such as safety doors) or must warn users about the risks of using the product. However, when the Yamaha Rhino was initially sold on the market, it did not contain any safety doors, making it easy for a person's limbs to move outside the ATV in a rollover accident. Yamaha has now begun manufacturing safety doors for the Rhino ATV.

Parents of children who were injured in Yamaha Rhino rollover accidents are now filing lawsuits against the company. Charges in the lawsuits include product liability, personal injury and wrongful death.